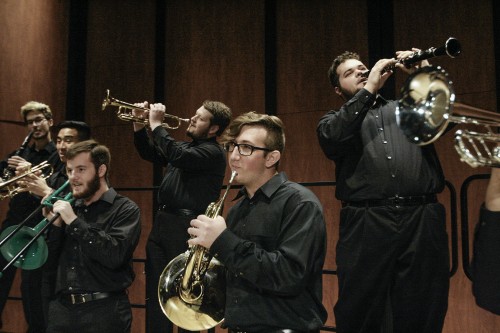 Nostalgia was in the air as students got animated singing “Summer Nights” from the musical “Grease,” among other favorite show tunes Nov. 20 in Morgan Auditorium for “Barbershop on Broadway,” the A Cappella Barbershop Club’s fall concert.

The show, full of innovative voice-only arrangements of old classics, such as “Can’t Take My Eyes Off You,” from  “Jersey Boys,” drew a crowd that nearly packed the auditorium.

As the curtain opened the audience cheered for the Barbershop Club before even a single sound came out of the performers’ mouths.

The program began with songs by the club’s combined men’s and women’s choruses. One member explained after the combined songs that barbershop groups are usually gender specific, but nowadays men and women are incorporated in the same groups to create a unique sound.

During Third Street Sound’s performance of “Seventy-Six Trombones” from “The Music Man,” the men had musical instruments as props on stage that they would use to amuse the audience. They each picked up a trombone, trumpet or clarinet and pretended to play enthusiastically as their “doots” and “bops” made up the musical break.

Mixed Nuts’ Garrison Holder, a senior music major, accidentally began singing Stephenson’s lead part in their first song. They showed professionalism and vocal dynamic by quickly switching parts for most of the set.

The group’s set was not lacking in sound and energy despite the initial mistake and alumnus Wesly Tan was temporarily replaced with sophomore athletic training major Ryan Chaney.

“This is rewarding to us because we get to see professionals perform,” Holder said.

Not every college ensemble can say they get a prime example of what they strive to be in their music career at their own recitals.

Guest group MAJIC Touch performed a set toward the end of the program. Stephenson is a part of MAJIC along with her comrades whose first initials make up their group name.

Throughout the performance, the singers provided brief background on the songs they performed. The tone of the night changed when the heart wrenching “Bring Him Home,” from “Les Miserables” was introduced.

“I thought I was going to cry when they did the song from ‘Les Mis’,” said sophomore biology major Charonne Razafindralay.

Razafindralay attended the concert for her honors colloquium class and is also a singer herself.

To conclude the concert, Carol and the Belles performed songs that they will be singing in a competition in January including “Now­adays” from the musical “Chicago.”

Challenge Accepted, the women’s quartet, won the Sweet Adelines Sounds of Harmony fall meeting for Region 11 just a week before the concert. The members donned their medals on stage. With the help of donors, they will be able to compete in the championships next August in Florida.

“Some of these songs they’ve never sang with so much energy, so thank you for pulling that out of them,” Stephenson said.