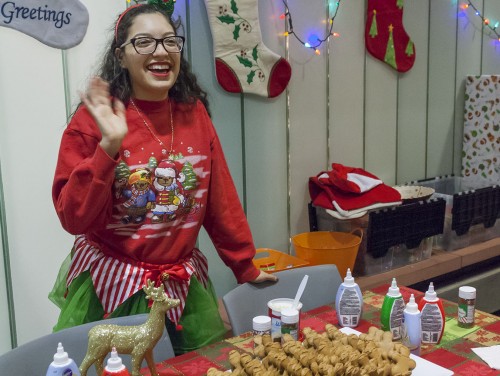 The first floor of the Campus Center was transformed into a winter wonderland Dec. 1 at the annual Campus Activities Board Holiday Extravaganza.

Sparkly snowflakes hung from the ceiling, candy canes were taped to the walls and elaborate Christmas sweaters were worn by members of the ULV Dance Team, College Panhellenic Association and other club members.

As soon as the event began, a line for free thermal tees that read “I’m Feline Festive” with a picture of a winter-ready cat strung across almost the entire length of the building.

“This is my last year and the first time I decided to come to this,” senior kinesiology major Cristal Montiel said. “The free shirts are all gone.”

CAB members were split up to represent each holiday, for which they had to create an activity, decorate the booth and order food, said CAB marketing chairwoman Tori Perez, junior business administration major.

The Hanukkah table was decorated with dreidels, a traditional Jewish spinning top game, and a picture coloring contest hosted by CAB spirit chairwoman and senior Autumn Simon, senior journalism major, and some of her peers.

The Kwanzaa table provided a variety of colored and lettered beads along with different types of string to make jewelry. Posters on the wall showed the names and meanings of the eight days of Kwanzaa.

At the outdoor Campus Center lounge, students could get personalized phrases and colors air-brushed onto beanies and caps.

Different cultural food stations provided potato latkes with unsweetened applesauce and sour cream and short ribs with apple at the Hanukkah section; deviled eggs, mac and cheese balls and turkey and ham sandwiches at the Christmas area; and sweet potato, jerk chicken and gumbo for Kwanzaa.

“I don’t get what those foods had to do with Kwanzaa since it’s a celebration of African roots,” senior psychology and international studies major ShaiAsia Wannamaker said. “For one, jerk chicken is Jamaican, gumbo is southern creole and sweet potatoes are just black American. Kwanzaa was created in America but it’s based on African values and embracing your African roots, so I would assume there would be some attempt at traditional African foods.”

Since the CAB members on Kwanzaa duty don’t actually celebrate the holiday, their knowledge of traditional foods relied on the Internet.

“We researched it and then picked based on what was most common,” Perez said.

The Holiday Extravaganza began two years ago, previously being held in Davenport Dining Hall and the Bonita Building.

Seman stays positive against odds
ULV stands up for DACA