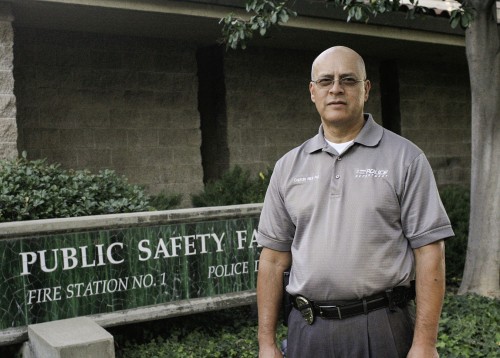 After serving the community for over 30 years, La Verne Police Department Capt. Nick Paz will be sworn in as police chief Jan. 1. As police chief, Paz said he plans to strengthen the communication between the community and the department and continue to build upon the foundation the current chief of police, Scott Pickwith, has made. / photo by Taylor Bolanos

Plane-flying, horse-riding, mountain-biking Nick Paz, who has worked for the La Verne Police Department for 33 years, will be sworn in as the new police chief in January.

Paz grew up in East Los Angeles before moving to Covina, where he attended high school. After graduation, worked at Wickes Furniture for three years before he moved to La Verne. He plans to continue the work of his predecessor Scott Pickwith, who believes that “no call is too small.”

Paz took some time out of his busy schedule recently to talk to the Campus Times about his background and his expectations for his new positions.

What was your favorite subject in high school?
I went to Northview High School in Covina. My favorite subject was probably history. It came easy to me, and I love reading about it. I like the Western stuff, like cowboys and settlement in the western United States.

What made you want to become a police officer?
I didn’t have a plan. One day I was talking to my best friend in high school about what we were planning on doing after we graduated. He said he was going to be a deputy sheriff. I said that sounded good and started applying.

What was training like?
It was pretty intense. Back when I was in the academy, they were called “stress academies.” It was like being in the Marines. There was a lot of yelling at you, there was a lot of physical agility training, shooting, learning about the law, just doing a variety of things.

What about the psychological preparedness testing?
That’s why it’s called a “high stress academy,” because they try to get into your mind. What they call it is, they tear you down, and they build you up. So, if they’re yelling at you, and somebody out here in the street might yell at you, and you break down, then obviously it shows that you’re probably not cut out for the job.

What do you hope to accomplish as police chief?
Pretty much continue the service that the present chief has in the community. He’s got a philosophy of “no call too small,” which is a good thing.

Can you explain the “no call too small” philosophy?
Basically we aim to handle any call that we get and help the public as much as we can within our sphere of law enforcement. I hope to continue that, and if I can improve on anything else with relationships with the community, I’ll try.

What are the worst crimes in La Verne, typically?
Our biggest problems are thefts within the stores, commercial theft, home burglaries, and thefts from vehicles.

Does the LVPD do any sort of community outreach?
We have several programs. We have a citizen’s academy, it’s actually gonna start next year, I think in March or April. That’s open to any resident of La Verne, or any ULV students that want to come. It’s a good course because it shows people the perspective from our point of view, law enforcement. It puts people, the regular public, in situations that we come across. Every day, they get to fire a gun, they have to do traffic stops, do house searches. That’s just one of the programs that we have. We also have our Open House, where we invite the public to come in and look at the facilities, interact with us.

When it comes to educating the public, what are their biggest misconceptions about police?
I think a lot of people think that it’s an easy job and that anybody can do it. When we put them in situations where they have to think quick and make quick decisions, they find that it’s not as easy as they thought it was. We go through a lot of training to handle situations that we come across. Obviously the regular citizen out there doesn’t have much training. For some reason, they think they can do the job.

For me right now, I’m not on the street anymore. It’s more mundane because I’m a paper pusher now, so I’m in the office all day. But for the regular patrol guy, it’s different every day. You come across situations, meet different people, so it’s interesting.

And what have you found to be the most rewarding aspect of your work?
I think just helping people. Some people out there are just very appreciative of what we do and that’s kind of rewarding.

How long were you on the street patrol vs. being a “paper pusher?”
From the time I got out of the academy to the time I was a lieutenant I spent that time in the street. Once you become a lieutenant, you’re inside, and you still go outside but not as much. I became a lieutenant around 2005.
A lieutenant supervises an entire shift. He’s in charge of the sergeant and all the officers. The patrol officer is the guy who handles the everyday calls out in the street, they take the reports, the crime reports, and arrest people. The watchman pretty much stays in the station and oversees the operations of the patrol guys and the people that are working, civilians inside the station.

How does one become a police chief?
Different departments do it different ways.

Some departments hire from the outside, so you apply for the job, just like any other job.

We promote it from the inside the department, so anybody that has the minimum qualifications, you just kinda apply for the job, and then you go to through an interview process, and then you do some testing.

What does that testing involve?
For us, it was a written project that we had to do, and then there was an interview with the city council and mayor. For our city, the council and the mayor are the ones that select the chief.

What are your hobbies outside of your work?
I pilot, I horse ride, and I’m a mountain biker. I fly single engine planes, I learned when I was in high school. My dad was an avid aviator, so I followed his footsteps.