By Campus Times Editorial Board, Natasha Brennan on December 9, 2016 in Editorials, Opinions 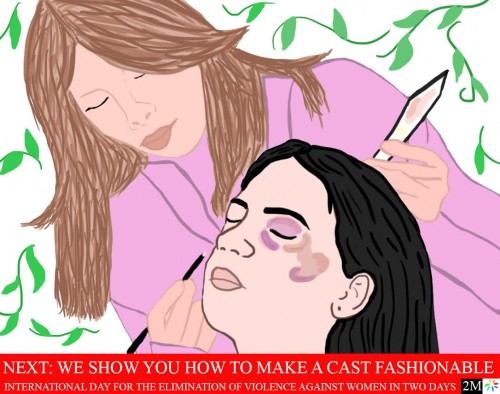 When women become victims of domestic violence, many are already reluctant to come forward and report it. Sadly, the norm is to hide it even from family and close friends and let the perpetrator get away with it, while she has to live with the emotional and often physical burdens of the episode.

This type of reaction is already normalized both in our society and across cultures, but when a state-owned TV channel from Morocco aired a segment on International Day for the Elimination of Violence Against Women teaching women tricks about covering up beating bruises with makeup, backlash was almost instant.

While some claim the on-air demonstration was aimed at empowering women to be able to continue with their daily activities after an episode of domestic violence–not letting the aggression stop them and limit their potential–suggesting that simple of a solution to such a complex issue does little to actually expose the problem and deal with it in a constructive way.

Telling women to cover up something that should be much more widely discussed and reported reinforces the stigma associated with domestic violence. The idea that these women have something to be ashamed of and not the perpetrator, is offensive. They should not have to worry about how society views them, while the perpetrator gets a free pass.

Makeup is not the way to address the issue. It is not skin-deep, so it should not be treated as such. Continuing to give domestic violence a secretive tone will only further discourage women from speaking up and realizing that they have every right to do so. Victims carry a heavy burden with lasting impact on their lives, and they should not be told that the way to deal with this is to put on a poker face and pretend nothing happened.

It is time to stop projecting the normalization of domestic violence onto the victims of it, while alleviating the accountability that the perpetrator faces. It is not only disrespectful but also offensive to those who have had to deal with episodes of abuse and whose scars from the episode last way longer than the bruises they got from it, which no amount of makeup can help fix.

No women should have to face such violence, and those who go through it should not be presented with an incredibly superficial attempt at a “solution” to their trauma. Making light of how serious and impactful domestic abuse is only prevents us from moving forward with the issue, feeding the stigma and discouraging victims from ending the cycle of shame and reporting.

Instead of teaching women how to cover up bruises, their efforts should focus on preventing aggressors from making them in the first place.

advertising, domestic violence, International Day for the Elimination of Violence Against Women, Morocco