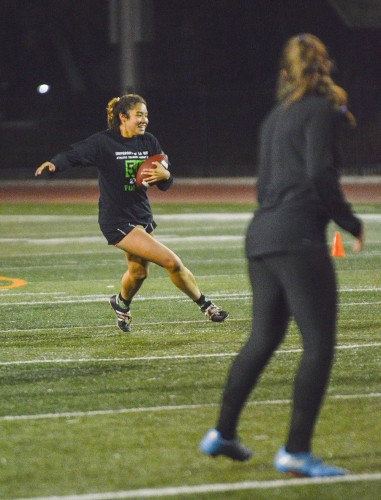 The women from the La Verne soccer team were ready to play a game against each other, but waited until 8 p.m. to see if more women would show up. As they waited, bystanders and supporters came in waves and participated in cheering while also enjoying a prize raffle, free snacks and warm hot cocoa.

Lacey Corcoran, junior psychology major and RHA programming co-chair, was shivering in her seat as she spoke about the event.

“Not too many people could come out to this event because of the weather, but they are missing out,” Corcoran said.

As the game started, some men from other La Verne sports teams decided to sign up and play against the women to make the teams larger. The group consisted of athletes from the football and basketball teams.
Some on the team were not affiliated with any organized sport at all, but the inclusion created a supportive atmosphere with the women.

Timothy Polman, senior psychology major, RHA member and member of the swim team, helped set up the event as an RHA member by organizing the teams, cones and food distribution.

“This was not a traditional game, since it became a co-ed boys versus girls match, so it was awesome to watch,” Polman said. “It was exciting to see the girls get the first goal of the game as well.”

The game started off strong for the women, who scored a touchdown within the first five minutes and gained an extra point, but in the end, the men beat the women, 28-7.

From the sidelines, some women shouted comments to the men including “Let’s play soccer now so we can beat you” and “We would’ve won if I actually played football.”

On the sidelines, junior sociology major Marissa Puccio watched the game with her friends.

“I am interested in supporting events that involve feminist support and female strength,” Puccio said.

Puccio said women in normally male-dominated sports are inspiring, because gender equality is something that she cares deeply about. Events on campus that promote women’s empowerment and equality make Puccio want to get more involved on campus, she said.

“I enjoyed the game very much,” Puccio said.

In the end, the men were excited that they won the scrimmage, but everyone was ready to go inside as the weather grew colder. No one left empty-handed as the prizes were raffled equally to the participants and players.