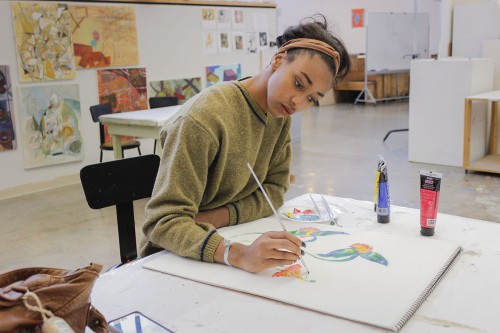 Kelsi Robinson, senior political science and psychology major, is a middle blocker for La Verne’s volleyball team. Robinson has been playing volleyball for eight years, and is considering playing abroad after graduation. Her performance this season earned her SCIAC Volleyball Athlete of the Year. When off the court, Robinson enjoys painting and drawing. / photo by Berenice Gonzalez

After another phenomenal season to cap off her senior campaign, middle blocker Kelsi Robinson earned recognition from elite company this November being named to the AVCA All-America third team, while also collecting the title of Southern California Inter­collegiate Athletic Conference Volleyball Athlete of the Year.

Consistent production and big-time performances in key games from Robinson helped lift her team to being ranked as high as No. 19 in the national polls and an appearance in the NCAA Division III playoffs.

Robinson used the post-season opportunity to show why she was named SCIAC Player of the Year, putting away 20 kills and blocking eight shots in five sets.

She said that award easily trumps the rest.

“Conference athlete of the year will always mean a little more to me,” Robinson said. “There are so many amazing athletes in our conference, many of them my own teammates. So being recognized by the SCIAC meant a lot to me.”

Statistically, this was Robinson’s best season of her career, ranking atop the conference with 307 kills and 94 blocks.

Consistently performing at this high of a level is not something easily accomplished, and Robinson credits her support system for her success.

“It took a lot of support from my coaches, family and teammates,” Robinson said.

“I had to stop myself from consistently checking stats and worrying about my ranking and just play the way I knew I could. Having incredible teammates by my side, and praying before every game made playing a lot easier than previous years,” she said.

“Our setter Tiffany Mancuso and I promised to make this season ours and push the team to the heights we knew we could reach, and I’m proud we accomplished that,” Robinson said.

Robinson also attracted attention with her decision to kneel during the playing of the national anthem before games, following the protest against police brutality targeting African-Americans initiated by San Francisco 49ers’ quarterback Colin Kaepernick.

“I really hope my message was heard by others,” Robinson said.

“I had many teammates and fans approach me about why I decided to kneel, giving me the opportunity to spread awareness about the discrimination and injustice the African-American community is experiencing today.”

With Robinson set to graduate this spring and deprive the team of her quality and leadership, there is a lot of work to be done by the Leopards to get back to where they were this season.

“I think we will need to really focus on making sure that we all have the same end goals and are all on the same page,” sophomore setter Natalie Barragan said. “Meaning we all are focused on next season and treating this spring time as preparation time for the upcoming season.”

Senior hitter Marisa Rojo, who played alongside Robinson much of this season, said she learned a lot from Robinson, and feels she can bring that knowledge to the table next season and become a leader.

“I learned to remain positive no matter what the situation was from Kelsi,” Rojo said. “She always remained strong willed to better herself and the team when we were down.”

“I also learned that there is always room for improvement,” Rojo said. “As amazing as Kelsi is, she would ask others for advice and critique to better herself in any way she can.”

The Leopards look to take what Robinson and her team have built these past two seasons, and grow even more during the off-season. Robinson will go down as one of the best ever to play volleyball at La Verne.