By Berenice Gonzalez, Jose Brambila on December 9, 2016 in Soccer, Sports 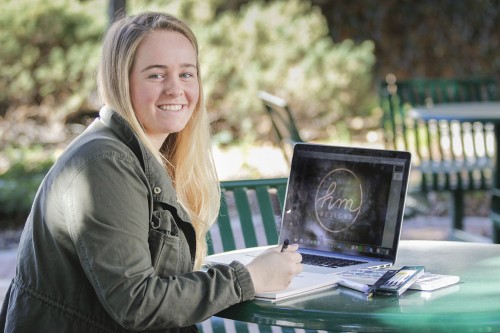 Senior communications major Heather Seman is the goalkeeper of La Verne women’s soccer team. When she is not playing soccer, Seman focuses on creating designs on her computer, including her own logo. She also enjoys calligraphy, painting and drawing. / photo by Berenice Gonzalez

After being unable to play in the past couple of years due to injuries, senior goalkeeper Heather Seman was looking forward to ending her senior year on a high note.

Seman had a total of 91 saves and a 1.84 goals-against average to build a leadership role throughout the course of the team’s season.

She could not stop the women’s soccer team losses from pilling up, despite consistent production and big-time performances in key games.

“It’s frustrating to lose games and get scored on,” Seman said. “Everyone was out there every day working hard and giving each game our best. Unfortunately, a lot of close games just didn’t go our way.”

No other player could have been better prepared to deal with this season’s adversity than Seman. During her collegiate career, she has experienced many tests such as tearing her posterior cruciate ligament.

“Thanks to our athletic trainer and strength and conditioning coach, going into (the) season my knee was strong and ready to play again,” Seman said.

Unable to play the sport she loves for a large portion of her collegiate career, Seman found alternative hobbies.

“I love hiking, spending time with my friends and family and being creative. I love to do calligraphy, hand lettering, painting, drawing and graphic design,” she said. “It’s definitely my stress release outside of soccer.”

Seman said she truly believes that despite the negative results of this season, the Leopards can do better and achieve more.

“I am confident that if they all continue to work hard and put in the effort and passion into the game that they have shown this year, then this group can do great things,” Seman said. “Every girl on this team brings something special to the team.”

Head coach Lauryn Pehanich said she is going to have a tough time replacing someone with Seman’s class.

“Heather has truly been the ideal team player to the women’s soccer team. In her years with the program she has exemplified maturity, class and leadership,” Pehanich said.

“She led the team on the field by keeping us competitive in many games and off the field she was a mother hen to everyone around her. Heather will definitely be missed.”

Junior forward Jessica Hernandez said Seman was everyone’s go-to person on and off the field, and a source of motivation during practices and games alike.

“Our team was always confident in Heather’s ability as a goalkeeper and she did her job to the best of her ability, even with painful injuries that she decided to play through because she knew we needed her,” Hernandez said. “She left big shoes to fill.”

“She was one of the busiest players on our team but always made time whether if it was to talk, be with her teammates, check in on all the girls, plan team bonding and other things. All the girls looked to her as the mom of the team, basically,” Hernandez added. “She has thee biggest heart and is one of the sweetest, brightest, most caring people I’ve had the pleasure of knowing.”

Seman is set to graduate in the spring and plans on earning a master’s degree in communications.

She also hopes to become a graphic designer for a professional sports team, and for someone whose faced the adversity she has, that does not seem like such a daunting task.

Slut-shaming is not the answer
CAB, clubs spread holiday cheer