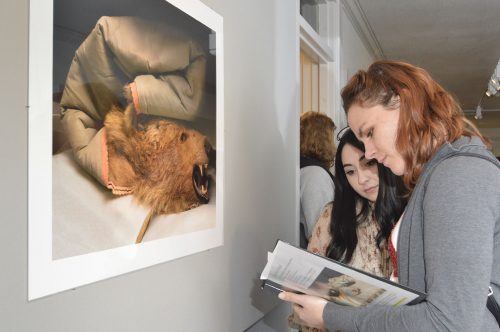 The Carlson Gallery became a busy museum Thursday as about 40 people walked along the hallway, stopping to stare at the dramatic photo exhibition “Solomon’s House” by artist Sarah Cusimano Miles. Visitors were encouraged to browse the gallery and stay for an artist talk from 5 p.m. to 6 p.m.

Miles’ exhibition explores the collections of the Anniston Museum of Natural History in Anniston, Alabama, through 19 high-resolution composite images.

Some of the preserved animals were photographed by themselves with a simple, black background.

Students seemed intrigued, some slightly disturbed, by the images of dead animals.

The word “uncomfortable” floated around in the air, being mentioned by many throughout the exhibition’s opening.

“The specimens are taken from the dark storage where they reside and bathed with light to illuminate the often disturbing and exquisite elegance of the accumulated and warehoused organisms,” Miles wrote in an essay about her exhibition.

One piece gained a lot of attention, causing those walking through the gallery to stop in their tracks to gawk at the photo.

“Brown Bear (Ursus arctos)” featured a taxidermied head of a brown bear on a white sheet. A folded gray blanket with peach scalloped trim was placed on top of the head, the bear’s neck fur tucked into the end of the blanket.

“This is the one that makes me most uncomfortable. I think it is the way the blanket wraps around the head, it is like the bear itself is wrapped inside, contortioned into the folds,” junior photography major Ashlyn Hulin said. “I think this is the most interesting gallery I have seen yet.”

“He has this one eye that’s just staring at me,” Zinzalian said. “I think it would be less weird for me if it was just the head without the blanket.”

“These photos may tell their own stories, or inspire us to make up our own. These are dead things brought to life by the power of imagination, and science made art by means of artifice,” Associate Professor of Theater Arts Sean Dillon wrote in his essay “Between Composition and Decomposition,” featured at the exhibition.

Miles, an Alabama native, was unable to attend the reception. She discussed her work and answered questions over FaceTime on an iPad mounted to a mobile metal rod. The Internet connection was not very strong and those in the gallery were asked to disconnect their phones from the Wi-Fi in hopes to improve the connection.

Sophomore photography major Dorothy Gartsman enjoyed the photo “Pangolin with Garlic,” featuring a pangolin on its hind legs against a black blanket with scattered garlic bulbs and jars of herbs. The photo made her curious about Miles’ inspiration.

“I really like how you photographed the subjects in such different ways. The way they are posed gives a different quality than to what they actually are,” Gartsman told Miles via FaceTime.

“I asked her how she decided what subjects to photograph, how she chose how to pose it, and where she got the idea to put it together like this,” Gartsman said.

The exhibit runs in the Carlson Gallery on the first floor of Miller Hall through March 24.