By Natasha Brennan on February 17, 2017 in Columns, Opinions

A sense of belonging is important to a child’s upbringing. That is why most parents get their children involved in some type of sport or activity: soccer, cheerleading, football, or boy scouts and girl scouts.

If you think about it, Boy Scouts and Girl Scouts are really fraternities and sororities for little kids: you pay dues, plan activities, go on retreats, have mentors and can be a mentor to others. Scouts is about brother or sisterhood, helping others and developing social and even survival skills.

In 2007, my mother forced me to join Girl Scouts. Fifth-grade me was reluctant because I was what others called a “Tomboy.” I hated the color pink, I’d dress for comfort, and I was known to be pretty rough. I thought all Girl Scouts did was wear skirts with sashes and sell cookies.

After a year of being a scout, I learned that Girl Scouts was much more than that. They got dirty and went camping. Depending on your leader, you could wear a vest rather than a sash and pants rather than a skirt. I did amazing things and had opportunities I would have never had if I hadn’t been a scout. I continued the program until I aged out and gained my Girl Scout for Life membership card. 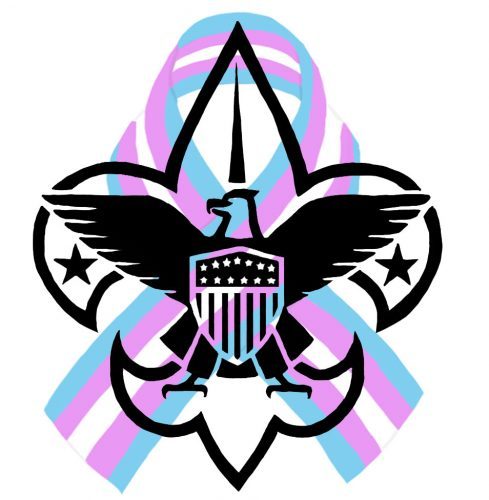 In the summer of 2013 I went to a beach camp where girl scouts were on one side of the beach and boy scouts were on the other. It was there, in the co-ed dining hall, that I learned that there were quite a few girls who were happily Boy Scouts. It made me wonder why I had never met a boy Girl Scout.

In November, New Jersey mom Kristie Maldonado received a phone call informing her that her nine-year-old son, Joe would not be welcome at his first Boy Scouts meeting as he was born a girl. Joe Maldonado fell victim to what was an outdated policy more than a century old.

In January, Boy Scouts of America announced that they will be accepting new members based off their self-identity and their application, not their birth certificate. This new policy comes over three years after the organization ended its ban on openly gay leaders.

Both Boy Scouts of America and Girl Scouts of the USA were founded on religious beliefs and patriotism, still including “God” and serving the country in their oaths. Some may even view the organizations as traditional and conservative with a negative tone. However, they do wield much influence on policy in other youth programs.

The Boy Scouts’ addition of transgender youth, although 107 years late, is an example of organizations rooted in tradition making the right move towards inclusion and acceptance. I hope that other youth programs follow. This is especially important now since President Donald Trump’s Feb. 10 move to combat former President Barack Obama’s efforts toward transgender inclusion.

It is important for children, especially those growing up with an identity that often meets prejudice, to find somewhere they belong. Boy Scouts of America now provides a more inclusive place for those young individuals to find that sense of belonging, a policy that should be embraced and adopted.

Natasha Brennan, a sophomore journalism major, is arts editor for the Campus Times. She can be reached by email at natasha.brennan@laverne.edu and on Twitter @NatashaMBrennan.