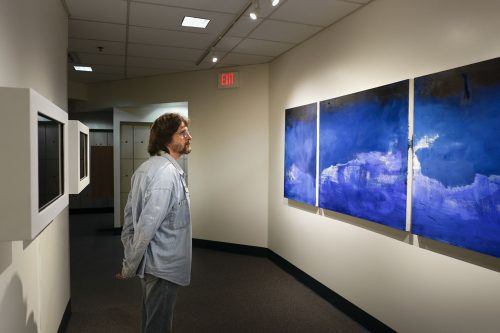 Library assistant Dave Reed views “Space to Heal” by Jennifer Montenegro. The painting is part of the exhibit “What I Am Allowed To Be” curated by Humberto Reynoso. Hosted in the University of La Verne College of Law Art Gallery, the exhibit features the mixed media works of six different artists from different cultural and sexual backgrounds. The works challenge the idea of identity as “subjective perspectives on learned behavior.” / photo by Cierra Boess

Gender, religion and sexuality are three controversial topics showcased in the new College of Law art gallery exhibit, “What I Am Allowed To Be.”

One piece by Lou Woods explores feminine and sexual identity through a three part video sequence titled “Daughter I,” “Daughter II,” and “I am a Secret I Don’t Have to Share.”

It attempts to reconcile trauma by embodying female identity.

“The idea was student-generated and was supported by Pride Law which is the LGBT community on campus,” said Professor of Law Placido Gomez.

Gomez said the student community was very receptive towards the exhibit and showed support for marginalized people.

“This is an often neglected part of the community and shows like these are a good way to show positive vibes,” Gomez said.

Luis Perez, a third year law student, commented on how the exhibit had relatable subject matter.

“This topic actually means a lot to me, it hits close to home because I have two friends that are lesbian and I feel that all genders and religions have a right to be,” said Perez.

He also said that topics deemed controversial are important to have on campus.

“Universities are places for higher learning, we should be open to discussing new ideas and challenging different concepts,” said Perez.

Alberto Argueta, a second year law student, said that the art is an effective way to create dialogue for things that are not always understood.

“I think it is important to have exhibits like these on campus because people can’t learn to empathize unless there is exposure,” said Argueta.

Third year law student Chelsea Stone also believes the exhibit is a way to connect with the community interpersonally.

“We pride ourselves on diversity here and exhibits like this help us connect with people in the community,” said Stone.

The exhibit will be available until Feb. 10. For more information, visit law.laverne.edu.