By Campus Times Editorial Board, Natasha Brennan on February 24, 2017 in Editorials, Opinions 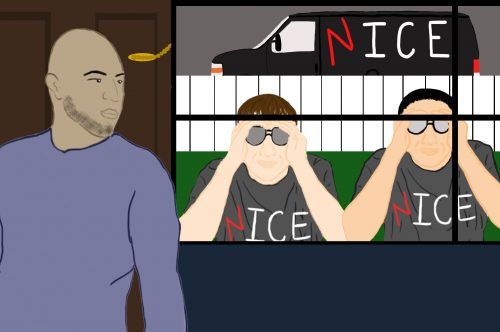 Immigration advocacy groups, and even the White House, are saying people suspected of living in the United States illegally are being rounded up in large numbers as part of stepped-up enforcement under President Donald Trump.

Advocates say heavy-handed raids in Atlanta, Chicago, New York, Texas, North Carolina and elsewhere have occurred. This understandably has the illegal immigrant community living in fear and on edge that they will be separated from their loved ones and deported back to their countries of origin.

As a candidate, Trump vowed to take a hard line on immigration. Five days after taking office, he signed an executive order saying any immigrant living in the country illegally could be a priority for deportation.

Trump claims to target only criminals. This, however, has done little to quell the fear in the immigrant community.

“We’re actually taking people that are criminals –very, very hardened criminals in some cases – with a tremendous track record of abuse and problems, and we are getting them out,” Trump said at a news conference last Monday with Canadian Prime Minister Justin Trudeau. “And that’s what I said I would do.”

The statistics tell a different story, showing immigration raids have a greater focus on non-criminals.

Of the 678 people rounded up in 12 states during last week’s raids, 74 percent had been convicted of a crime.

That is down from 90 percent of detained people with criminal records in 2016 under President Barack Obama, according to an USA Today analysis of more than a dozen federal raids.

Illegal immigrants should be scared, but they should also remember this is the United States of America and they have rights.

The American Civil Liberties Union recommends doing the following if an Immigration and Customs Enforcement agent shows up at the door:

• Don’t open the door, but be calm. You have rights.

• Ask what they are there for (and ask for an interpreter if you need one).

• If they ask to enter, ask if they have a warrant signed by a judge and if so, ask to see it (through a window or slipped under the door).

• If they force their way in, don’t resist. Tell everybody in the residence to stay silent.

•If you are arrested, remain silent and do not sign anything until you speak to a lawyer.

These are some defenses illegal immigrants have against deportation. If immigration officials discover that someone is living in the country illegally, they have the right to a hearing before an immigration judge in the Executive Office for Immigration Review or EOIR (unless they returned to the U.S. after a previous order of deportation). The U.S. government cannot, in most cases, simply send people back without a hearing. Immigrants also have the right to representation in immigration court by an attorney, but the U.S. government does not have to pay for one on their behalf.

We are living in one of the darkest periods of our country’s history. Unfortunately, this is only the beginning and things tend to get worse. We must stay vigilant and stay informed, and most importantly care for one another. We must not buy in to the fear mongering. We must stay strong and never forget what America is about.