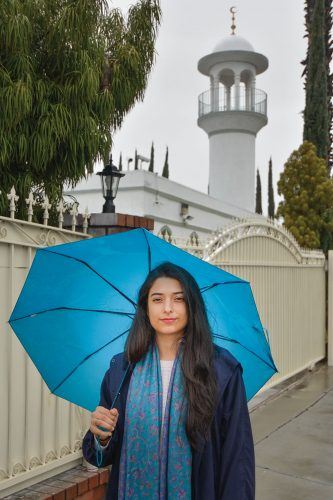 Mariela Martinez, senior political science major started the “Letters of Love” project in December in response to a hate letter received in December by the Islamic Center of Claremont. Martinez also tutors children at the center at Foothill Boulevard and Garey Avenue in Pomona. To date the “Letters of Love” project has received nearly 200 letters from students and community members. / photo by Conor Holahan

University of La Verne students have come together for the project “Letters of Love,” which was started in response to a hate letter received in December by the Islamic Center of Claremont.

The initiative, which has so far yielded nearly 200 letters collected since December, was started by senior political science major Mariela Martinez.

Martinez, the ASULV Senator, vice president of the Secular Student Alliance and Model UN, and secretary for College Democrats, initially came up with “Letters of Love” as an assignment for her philosophy class, “Power and Oppression.”

She worked on the project with classmates Selene Hernandez and Cheyenne Page, as well as with La Verne alumnus Tahil Sharma. The project gained momentum and the “Letters” took off.

“Tahil started an online campaign and went in person to city officials and people internationally and told them about this incident,” Martinez said.

The hate letter was brought to the students’ attention when Mahmoud Tarifi, social services director at ICC, published it on Facebook.

“He actually even said that they receive letters like that all the time, but that this one especially because of the time that we’re in, felt specially threatening,” Martinez said. “They felt that he needed to publicize it to let people know that this is happening and this is the community that we live in.”

On the letter, the author addresses the “children of Satan” and refers to Muslims as “vile and filthy people,” claiming that the United States is going to be cleansed and that what Hitler did to the Jews will be done to them too.

“We picked up the mail and our treasurer opened it up and he was shocked,” Tarifi said. “He was so upset that he called the board members and he said ‘this is unacceptable, we need to answer to this, we need to take action. We need not to be quiet, we need to make a stand.’”

Syrian graduate student Firas Arodaki, who worked as a mediator to introduce the letters and helped spread the word about the project, believes hatred can be fought with logic, understanding and getting to know the group under attack personally.

“I never took it seriously, but after the elections and everything, receiving such a letter is scary because right now people are talking about marginalizing the Muslims, trying to harass them. So putting words into actions is scary,” he said. “I wasn’t surprised, I was more shocked that this happened to supplement the hate speech in general.”

Martinez, who is part of the group of ULV students who volunteers at the mosque tutoring Syrian refugees, said the attack on people she works so closely with felt personal and needed a response.

“Even this part of the letter where it was like ‘you filthy people’ – you know nothing about these people.

They invented soap. Part of their ritual is cleansing themselves before practice, so I guess it was reflective of how ignorant and angry the letter was and again, it doesn’t actually reflect anything about them, it’s just this violent hate and anger towards a group that they don’t even know anything about.”

Upon receiving the letter, the ICC organized a community meeting to discuss their response. Attendees included the mayors of Pomona and Claremont, the chief of police of Claremont, city council members of both cities and University of La Verne representatives who spoke in solidarity with the Muslim community.

On this very reunion, the first letters of love were read out loud – 47 of them, collected at Phi Sigma Sigma’s annual talent show co-hosted by the Cabaret Series.

“Some people cried, I cried. Some letters are like ‘You’re not evil, we love you’ and simple messages and some are very deep,” Martinez said. “A lot of beautiful letters of love. This really reacted with people, it had a very strong response.”

“(It was an) absolutely wonderful reaction and expression of love and compassion. We felt like we are part of this community and people are looking out for our safety and that we are not in this alone,” Tarifi said.

“And other Americans will stand up for us, and that’s a really good feeling because one should never underestimate the society and people’s reaction to injustice and to hatred and bigotry and discrimination.”

Since then, letters are still being collected, showing that not only the community supports its Muslim population but is willing to stand up for them.

“We keep thinking we’ve given a strong enough message where they know they’re not alone and then stupid things continue to happen and they still need to know they’re not alone,” she said. “We still need to have community reaction, and this seems like one of the most appropriate and kind of easy, comforting thing that raises awareness about an issue, directly addresses it, and it brings in the community together.”

“For the Muslims, it assures them that they don’t live alone, there are people who are protecting them mentally or physically like the march we did last week,” Arodaki said. “It gives confidence for Muslims to be a part of this society in general, so I do believe it makes a difference, and it will also give a message to the politicians to show support.”