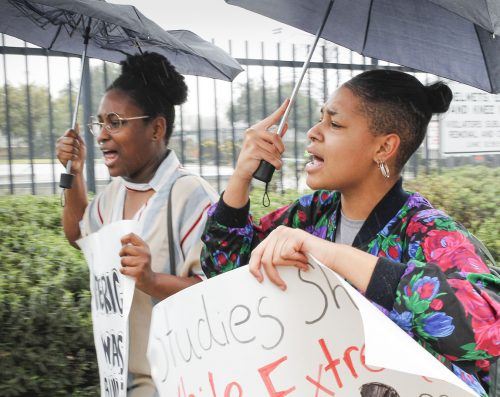 Junior psychology major Jedaun Carter and sophomore anthropology major Zimanei Slocum march from the Interfaith Chapel to the Islamic Center on Garey Avenue in Pomona on Friday. The march, organized by the Office of Diversity and Inclusivity and the Office of Religious and Spiritual Life, encouraged students to show their support for immigrants, refugees and the Muslim community. / photo by Hannah Burton

Students, faculty and members of the community from all different backgrounds gathered to march for equality Friday.

Marchers walked from the Interfaith Chapel on campus to the Islamic Center of Claremont in Pomona. University Chaplain Zandra Wagoner coordinated the march.

“We are marching for the communities who are particularly vulnerable or targeted (by) the recent executive orders,” Wagoner said. “It it is so important to be able to come together to show that love and solidarity for people in our community,” Wagoner said.

The executive order, intended to keep people from these counties out of the U.S. was since suspended, and the order’s suspension was upheld Thursday by the U.S. Ninth Circuit Court of Appeals in San Francisco.

The Friday march was “ people standing up for other people, against hate…for equality,” said Kelsey Sorenson, a Claremont bartender. “I support the Muslim community, and I don’t think religion dictates who we are as human beings.”

“My mom is Muslim,” Slocum said. “She converted to Islam. She has been threatened and harassed in the past. I have to stand up because I know what true Islam is, and I know what the media has portrayed Islam to be.”

“I think it is important for the La Verne community to express our outrage at what’s happening in relation to the ban,” Leaver said. “(We must) also express that … we believe in justice, equality, and humanity.”

During the march, members of Christian, Catholic, Episcopal, and Quaker communities held up signs. Some read: “We will be heard,” “The Episcopal Church Welcomes you,” and “Be Hospitable to Strangers, Hebrews 13:2.”

“This is a time when America as a whole society is called to lean back on the relationships that we have made over the years,” Bahnson said. “It feels risky to immerse yourself in cultures that feel alien to you, but at the same time I feel like the American ideal is one of diversity.”

Immediately following the march, a prayer service was held at the Islamic Center of Claremont in Pomona which consisted of praying for the country and overcoming this time for the Muslim community.