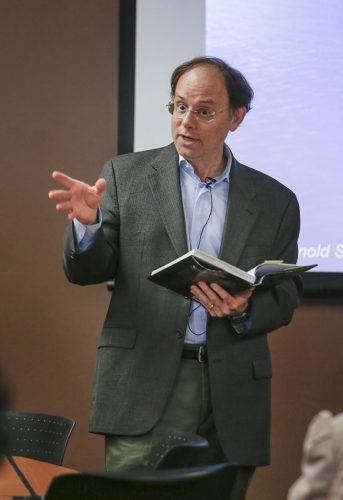 Professor Kenneth Marcus responds to a student’s question during his faculty lecture “Schoenberg and Hollywood Modernism” in the President’s Dining Hall Tuesday, Feb. 21. The lecture was interactive, with many questions directed at the crowd and a wide variety of music samples played. / photo by Cierra Boess

Professor of History Kenneth Marcus talked about a European Jewish composer who fled Nazi Germany and settled in Los Angeles during his presentation “Schoenberg and Hollywood Modernism,” at noon Tuesday in the President’s Dining Room as part of the faculty lecture series.

“I thought, ‘that’s an interesting combination,’” Marcus said. “Why would a classical composer like Schoenberg take up the friendship of this popular songwriter? Schoenberg also spoke at his memorial service. That piqued my interest.”

While in Europe, he developed his 12-tone composition method. The 12-tone method uses all 12 tones on the chromatic scale, a musical scale with 12 pitches.

Schoenberg’s method does not focus on one or two tones throughout an entire work, but instead gives each tone equal focus.

In 1926, Schoenberg got a prestigious teaching position at the Prussian Academy of the Arts in Berlin.

When the Nazis gained power in Germany, Schoenberg’s work was classified as “degenerate art,” and he left Germany in 1933. This forced exile gave Schoenberg an identity crisis.

“Just think for a moment what that’s like, if you identify so strongly with a state, and then you’re thrown out, and you become literally stateless,” Marcus said.

Schoenberg moved to the United States with his family and got a teaching job at the Malkin Conservatory in Boston, where he lived for a year.

He then moved to Los Angeles, where he found a community of artists exiled from their countries. In his first speech, he described Los Angeles as a paradise.

“I have come from one country to another, where neither dust nor better food is rationed, and where I’m allowed to go on my feet, where my head can be erect, where kindness and purefulness is dominating, where to live is a joy, and to be an expatriate of another country is a grace of God,” Marcus read from Schoenberg’s speech.

In Los Angeles, Schoenberg sought to remake himself, writing music that did not entirely conform to his 12-tone style.

Marcus said Schoenberg wanted to benefit from the film industry.

He supported himself through commissions and lessons to students of USC and UCLA. Through his students, he made connections such as Gershwin, American composer David Raksin and Charlie Chaplin.

“George Gershwin was one of these rare kind of musicians to whom music is not a matter of more or less ability,” Schoenberg said in the video.

“Music, to him, was the air he breathed, the food which nourished him, the drink that refreshed him. Music was what made him feel and music was the feeling he expressed. Directness of this kind is given only to great men.”

Schoenberg never returned to Europe. However, after World War II, his music experienced an “explosion of interest” from European audiences.

“He’s a very famous composer in Europe, where I’m from,” said Juli Minoves, associate professor of political science, who comes from Andorra. “But I didn’t know as much about his American years.”

Al Clark, professor of humanities, had read Marcus’ book on Schoenberg and attended a previous lecture.

“He is, as Marcus said, one of the two major composers in classical music in the twentieth century,” Clark said. “He is definitely unique among the exiled artists because he and Thomas Mann … are the two world historical figures who came here.”

Sophomore history major Jon Hall learned about Schoenberg in an honors course called Art And Exile, and in a course called La Verne In High Education.

“I learned … how established he was in Hollywood during the time from when he came to Hollywood to when he finally established himself as a California composer,” Hall said.