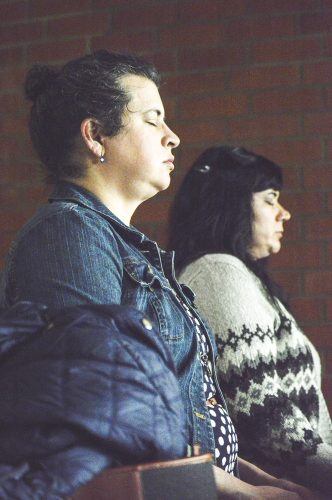 Staci Baird, assistant professor of communications, and Malissa Hernandez, administrative assistant for the communications department, meditate during The Quiet Spot in the Interfaith Chapel Tuesday. Bill Owen, Coordinator of Instructional Technology, leads the meditation every Tuesday from 12:15 to 12:55 p.m. and Wednesday from 5:30 to 6 p.m to help students and faculty relax and relieve their stress. / photo by Janelle Kluz

Bill Owen sat cross-legged in the front of the room, tapping a metal bowl and spinning the microphone around it to fill the room with ambient noise as he whispered instructions to three students sitting on round pillows.

“Meditation is not an easy thing,” Owen said while leading a group meditation session. “It’s really important for you to not be discouraged.”

“(The meditation sessions) started two or three years ago when Zandra Wagoner became chaplain and came up with the idea of the Quiet Spot,” Owen said.

Owen has been practicing meditation for 13 years and committed to hosting The Quiet Spot twice a week last fall. During the meditation session, Owen said that there were four positions one can take while meditating: sleeping, standing, lying down and walking. He told the attendees to focus on their breath and clear their thoughts.

Two students at the Wednesday session attended for the first time.

“I learned that I can zone into things and relax,” junior kinesiology major Agaly de Jesus said. “That you don’t always have to be so busy.”

The Quiet Spot information page on the University’s website said the practices “are great for calming the mind, relieving stress, and cultivating compassion.”

Zandra Wagoner, University Chaplain, started The Quiet Spot due to the benefits meditation could bring the students during their busy week.

Researchers from John Hopkins University reviewed 18,753 meditation studies, and found 47 trials that studied the benefits of meditation. They compiled their research into a report published in JAMA Internal Magazine in March 2014. They found that meditation can result in moderate improvement in anxiety, depression and pain. Regular meditation influences how the brain processes emotions even when one is not meditating.

According to a 2012 study conducted by researchers from Massachusetts General Hospital, Boston University, Emory University, Santa Barbara Institute for Conscious Studies and the University of Arizona, meditation changes the way the amygdala, a brain region involved in experiencing emotions, responds to emotional reactions even when the person is not meditating. In the study, people underwent either meditation centered on attention towards one’s breathing, thoughts and feelings, meditation centered on compassion to other people or no meditation at all.