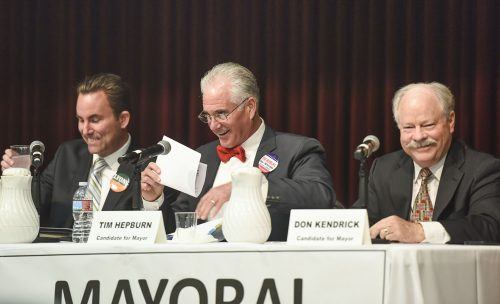 The mayoral and city council candidates answered questions submitted by the residents during a candidate’s forum Feb. 16 at City Hall.

Moderator Michael Duggan began the forum by asking each candidate why La Verne residents should support their candidacy.

Garwick talked about growing up as a “Marine Corps brat,” serving as a police officer in La Verne from 2002 to 2015, and his desire to keep police staff “as high as possible.”

Davis talked about his desire for more bicycle paths in La Verne.

Carder cited her previous experience on city council, the endorsement of five school board members, her position as liaison for the chamber of commerce, and her involvement with the Metro Goldline as reasons to support her campaign.

Lyons talked about his appointment on the Bond Oversight Committee and his endorsement from the Bonita Teacher’s Association.

Duggan asked the candidates whether La Verne should remain a full service city, with its own police and fire departments, or if it should contract outside services.

“We satisfy 80 percent of our calls, our emergency medical calls, within four minutes, and nobody does that,” Kendrick said. “We spend our money where it belongs, and that’s providing services to our residents.”

Garwick, Davis and Hepburn said they are willing to consider contracting outside services as an option.

“I think that we would see insurance costs and property values potentially change if we extended service to outside organizations,” Davis said. “So I would want to take into consideration a multitude of issues before we make a commitment one way or the other.”

“My concern is this: as long as our residents are safe, and we have the proper public safety, and proper equipment and tools and items for our police and fire to keep our residents safe, and we keep them as private,” Hepburn said. “If that changes, we have to look at other options.”

Duggan asked the mayoral candidates what position they think La Verne should take if California becomes a sanctuary state. Both candidates said they would be willing to deport undocumented immigrants who engage in criminal activity.

“The issue is this: if an undocumented worker is a felon, or has committed a previous crime, my feeling is that they should be deported,” Hepburn said. “As far as the immigration laws, I think our city does a very good job policing and watching people that come into our community.”

“The only thing that I am concerned about is criminal activity by anybody that is here illegally,” Kendrick said. “There are more Hispanics going back to Mexico than coming to California, and has been for several years. My concern is, are those coming, coming because this is a better place to create criminals, or is it because they want to create a job? I want to send the criminals away and I want to keep the good people.”

Duggan asked the city council candidates whether they would support La Verne complying with federal law or with state law should California become a sanctuary state. Karr supported compliance with federal law. Garwick and Davis supported compliance with state law. Garwick and Carder said that the threat of withholding funds for their projects would not sway their decisions.

Duggan asked the candidates what growth opportunities they see in La Verne. Carder and Kendrick agreed new leadership in the Chamber of Commerce will lead to more economic development in the city. Lyons said he wanted to develop Kendrick’s economic development subcommittee into a full-fledged committee. Hepburn said that La Verne’s affiliation with the San Gabriel Economic Partnership will aid in economic development.

“I personally would like to see more of the niche restaurants, the Chase’s, the Fourth Street Mills, for our younger families with strollers, kids, grandchildren, grandparents and all the families and seniors come downtown to communicate and socialize and I think we’re at that point right now,” Hepburn said.

Garwick and Davis said changes in transportation would lead to economic development. Karr said he wants to invest in local, technology-based businesses.

“Could transportation policies favor making our streets fast routes through town rather than tying our community together? Do you have a vision for a more people friendly street system?” Duggan asked the candidates.

Carder, Davis, Hepburn and Lyons stated that they support a more bicycle-friendly city.

“The current transportation plan is very old, it’s approaching twenty years old, and since then, it’s been bisected by the interstate 210,” Garwick said.

“In order to do this correctly, my belief is that we have to go back and redo and restudy it completely. We have a lot that is changed.”

The candidate’s forum concluded with closing statements from each of the candidates.

La Verne resident Jim Williams expressed support for Tim Hepburn for his role in helping La Verne residents prevent Walmart from coming into the city while serving on the Planning Commission.

“He did the right thing by bringing that motion forward and he sort of made the council go along with him,” Williams said.

“I would like to see her continue improving our city,” Reeves said.

“I like her approach to politics and her involvement in the community,” Litin said.

When asked about the candidates’ answers to questions regarding sanctuary status, Litin said he would prefer that La Verne comply with federal law.

“There’s a state bill trying to be passed, Senate Bill 54, which would require cities to have police not enforce or not cooperate with the (federal government),” Litin said. “I’m very much against that.”

“He’s a proven leader, full of trust, honesty, integrity and humility, and he’s led us for the last eight years into economic prosperity in the city,” Ivey said.

The elections for mayor and city council will take place March 7.