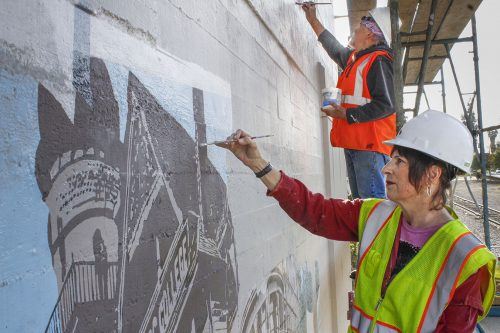 Artists Joy McAllister and Chris Toovey work to restore “Scrapbook,” the mural on the south side of the Arts and Communications Building on D Street facing Arrow Highway. The mural, based on historic photographs of old downtown La Verne, was first completed in 1992 as part of the city of La Verne’s public art project. / photo by Tyler Deacy

After 25 years of covering the south wall of the Arts and Communications Building, the mural depicting historic La Verne, titled “Scrapbook,” is getting a face-lift. The mural, which faces Arrow Highway, is expected to be finished by mid-April.

The original mural was painted in 1992 employing trompe-l’œil, a French painting technique, to depict scrapbook-like photos of the city.

“We pitched the idea to the city when they started their public arts project,” muralist Chris Toovey said.

“They wanted something historical. We had the idea of doing a trompe-l’œil scrapbook photos. They said, ‘Trompe-l’œil? We don’t know about that modern stuff.’ We said, ‘Don’t worry, it’s a 600-year-old tried and true technique.’”

“This wall is a hundred-year-old wall,” Toovey said. “The graffiti-resistant coat penetrated through the paint, into the substrate and wall. The graffiti coat started to crack and as it shrank, it took the paint with it.”

When cracks started showing in the mural, the team attempted to fix the damage.

“We came back eight to 10 years later to go after the areas that were peeling and spruce them up,” Toovey said. “Because that graffiti coat penetrated so deeply, it didn’t allow for any kind of repainting.”

Toovey and McAllister were a part of the three-person team of artists, along with Jeff Faust, who created the original mural.

“When we first painted it we just came on site,” Toovey said. “We had one little set of scaffolding and it took us about three months.”

The current restoration began in January but the permit process started in 2014. Because the mural is so close to the railroad, a right-of-way permit from Metrolink was required before the restoration process began. Obtaining the permit added $3,000 to the total cost.

“We had to send all people who were going to be on site,” Toovey said. “Every one of us had to go through a permitting class.”

Metrolink requires a fence to be around any construction site with a right-of-way permit. This process must be monitored by flagmen, people who signal at railroad crossings and direct trains safely.

“The flagmen had to come out and then the scaffolding had to go in. About $5,500 and another three or four months was added to the two years this has been in the making,” Toovey said.

After the scaffolding and fence were installed, the team began by using velum and transfer paper to trace the original mural. Then, the parts of the mural that needed work were scraped off using needle scalers and pneumatic tools.

The scraping process was noisy and disrupted classes in the ACB the week before spring break.

“It was a loud process. People from inside the building asked us to stop,” painting contractor John Bundschuh said.

The team is now in the quieter process of the restoration. Once a primer and base coat are applied, they can use the velum to transfer the original image onto the wall.

After the tracing is transferred, they will paint and conclude the project.

“This is the first full restoration that we’ve done,” Toovey said. “Any time you’re doing a restoration it’s specific to the job. It’s unpredictable.”