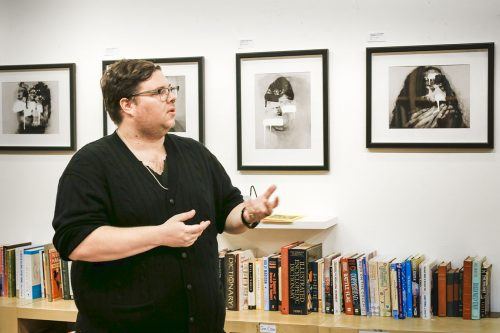 Artist Christopher Lawrence Baird’s first solo multimedia exhibition was held at the Claremont Forum Saturday. To capture his muse of movement, he made triple exposures of dancers with painted faces and copied the pattern of the face paint directly onto the prints. / photo by Cierra Boess

Artist Christopher Lawrence Baird demonstrated the power of combining photography and acrylic paint at the reception of his first solo art exhibit 6 p.m. on Saturday at the Claremont Forum.

“I like the classic aspect of black and white and its minimalistic nature,” Baird said. “I had a picture in my mind about what I wanted to do. It was like problem solving.”

Baird, a 30-year-old self-taught artist, grew up in Pomona and is now an Ontario resident.

He wanted to convey movement through his photographs and represent energy and motion in still images.

“I was trying to capture more than just a still,” Baird said. “All the images are hand held and I would just play with shutter speeds.”

Baird was previously a painter and started photography a year ago. He felt restricted by the traditional practices of painting and photography solely.

“The reason I moved to photography is that I got frustrated in painting,” Baird said.

His frustration resulted in a combination of the two mediums.

The collection incorporated three contemporary dancers who were the subject of the exhibit.

“I had them improvise dance, and I would set up a confined space,” Baird said.

Seiji Davis, an employee at the Claremont Forum, supports unconventional forms of art. He said the type of art in “.one” is more personal rather than objective.

He said that painting over photographs adds another layer and expands an artist’s options.

“It is just interesting to look at because it is unfocused and makes me squint my eyes and it draws my attention,” Davis said.

“My neurological face recognition or biological program is trying to read it, but it can’t.”

Steven Leflar, Baird’s co-worker, was new to this form of artwork and was introduced to it during the creation processes of the displayed work.

“I love it,” Leflar said. “Maybe I have seen it before, but I didn’t appreciate it until I saw his and he showed me what it really is.”

Leflar pointed out Baird’s “.g menichino no16” as the most resonating image in the collection.

He said the image reminds him of the government and its interaction with the public.

The exhibit was curated by an employee at the Claremont Forum and the artist himself. The images, despite not being arranged chronologically, tell a story about the importance of unstaged beauty and movement.

The Claremont Forum is a used bookstore located on the first floor of the Claremont Packing House. The bookstore houses the Prison Library Project, a program that provides free reading material to inmates nationwide.

Baird’s exhibit was installed March 2 and is on display in the bookstore until the end of March.

Celebrities, athletes should be political
Vendors polish for swap meet