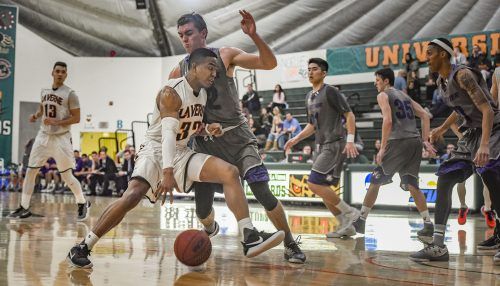 Junior guard Anthony White pushes past Whittier freshman power forward Nick Potthoff in the second half of the Feb. 21 game against the Poets. White ended the game with 24 points. Potthoff finished the game with 12 points. The Leopards ultimately lost at Frantz Athletic Court, 88-85. / photo by Alexandra Arkley

The game was a close and hard fought affair for most of the night. The Leopards would not give up despite their defensive lapses.

“It was a very intense, tough game.” Senior guard Tony Warwick said. “Both teams fought extremely hard, but sadly one team had to lose and it was us.”

La Verne came close to catching up with the Kingsmen in the second half with 18 minutes to go, when a free throw by senior point guard Hakim Arnold brought the game within three-points, 42-45.

Just as the Leopards seemed to be making a comeback, Cal Lutheran quickly quelled that with three-point shots.

The Kingsmen shot an impressive 7-12 from beyond the arc compared to La Verne’s 3-16 or 18 percent from the three-point range.

“Our opponent took advantage of our turnovers and turned them into points on the other end,” Arnold said.

“We were able to fight back even with our mistakes, but our comeback fell short with a three-point barrage from Cal Lutheran. They handled business and we fell short.”

The Leopards finished the season 16-10 overall.

Earlier in the week La Verne fell to Whittier 88-85 to wrap up the regular season.

A late push for a comeback fell short as Whittier held firm and won by three points.

Arnold was one of only two players in the SCIAC to rank in the top-5 in points per game and rebounds per game. He was named First Team All-SCIAC for the second time.

White was selected to Second Team All-SCIAC in a vote by the leagues’ head coaches. It is his first all-conference recognition.

La Verne will lose seven graduating seniors after this season, but head coach Richard Reed will have 13 players returning next season.

A preseason poll taken by the SCIAC coaches predicted the Leopards would not make the SCIAC Postseason Tournament.

They were in fact picked to finish eighth in the conference.

“We knew we were better than where the ‘doubters’ placed us to be,” junior guard Jamaal Willis said. “Although we did not go as far as we wanted, we surpassed their (SCIAC coaches) expectations.”

Willis said the loss will only serve as motivation to go even further next season. This is the first time the men’s basketball team has made the SCIAC tournament since 2011.

“I’m proud of my teammates that established themselves on the court this year and our entire team for giving our University something to be proud of again,” Arnold said.

“Although this team fell short, our legacy and ultimate goal will live on through our young players who are very capable of carrying on this new culture of La Verne basketball,” he said.

Gamers Guild battles to the death
Future of shopping is online