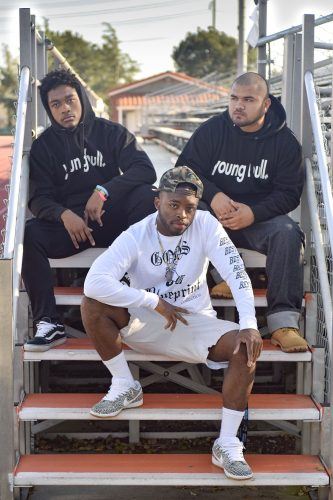 Senior TV broadcast major Ezra Broadus and senior business administration majors An-Tony Young and Kenneth Carcamo model for the Best Clothing Co. Brand. BCC was founded by Young and his father in 2009 in Gardena. The fashion line is influenced by the hip-hop culture, urban streetwear and sports. BCC sells online at its website bccbrandshop.com and uses social media platforms, including Instagram and Twitter, to promote its various products. / photo by Nadira Fatah

Being the best is sometimes as simple as wearing the “Best.” Just ask senior business administration major An-Tony “TJ” Young.

Originally the co-founder of a father-son team, Young has taken his creativity and business expertise to the fashion industry yet again, this time with the combined efforts of his closest friends, and created Best Clothing Co. Brand.

Young was 14 when his dad was laid off. He slept on the living room couch in a two-bedroom house he shared with his dad, stepmom and younger siblings, until the brand Jerkaholics was born in 2009. After his dad found him editing dance videos at 1 a.m., Young’s father suggested that they create their own clothing line. Inspired by the jerking dance movement, the clothing brand featured bright, eye-catching colors, which Young compared to street art.

The brand quickly developed through word-of-mouth when Young involved dancers who wore his designs in their videos. The trend soon went viral, scoring thousands of views on YouTube. With the help of a cousin who wore Young’s clothes and became the face of Jerkaholics, popularity spiked. Young edited several videos a month and was exposed to a completely new culture with skilled dance crews.

Through combined father and son efforts, Young and his family moved into a bigger house where he had his own room and a backyard.

“Just to see that the brand was a significant part of going to go look at a house, it was an eye opener for me that it was doing something to change our immediate lives,” Young said. “It was kind of like a kiddy thing. I hadn’t even hit puberty yet. So when it blew up, I was meeting all these famous people.”

Young credits his dad with getting the original brand off the ground and opening opportunities for his future. While his father organized logistics, including security, venues and finances, Young was free to be creative.

His dad taught him the skills he would need for his next venture, while his mom gave him his style when he was a child, which helped evolve the image of his new brand. She introduced him to new styles and encouraged his originality.

Young’s real work began when he started college and played football. For Young, football changed his mindset, giving him the drive to push himself and stay disciplined.

This helped Young branch off from his original line to a more mature image, which he called Best Clothing Company, for those who strive to be the best they can be.

“Everything became a little more strategic,” Young said. “It had to have a meaning. It’s saying more with less. Before it was just eye popping; you could see it across the street.”

The three said football instilled a bond between them that has strengthened their teamwork, friendship and productivity.

“When we were freshmen, we didn’t know our talents,” Young said. “We just knew we can do something. I know Kenneth can sell it. I know Ez can do the visuals.”

After tackling the challenges of the integrated business program together during their junior year, Young and Carcamo developed trust and a mind for money. With Carcamo’s strategic planning and Young’s motivation, the pair balanced each other’s energy to improve their business and develop their identity.

Carcamo provides logical insight to decisions before they are made, including when to release clothing and how many items to release at a time.

“Let’s make more of what we have, that way we can make more with the demand of it,” Carcamo said. “I’m good with numbers. I’m good with what’s trending or popular.”

Broadus joined the team after Young reached out to him, and he is now credited with developing new concepts and ideas for the future of the brand. He said he has always enjoyed clothing and keeping up with trends and plans of other businesses.

“I’ve always been interested in helping the community and helping my boys,” Broadus said. “I figured out what my talent is: basically being a visual storyteller. I want to make the best video that I can.”

The team’s friendship makes work enjoyable; it is a lifestyle, not just a business.

“We all know each other on an academic and sports level, but our friendships are so strong,” Broadus said. “We just vibe together like a brotherhood.”

The successful 2015 football season ultimately strengthened their bond and built their confidence. They have all seen each other work their best and use their motivation to keep improving.

“We’ve all been through the grinder together,” Carcamo said.

For the men of Best Clothing Co. Brand, their goals exceed selling clothes. Their brand is an investment into the community’s success. BCC Brand reaches out to up-and-coming, talented, young people and showcases their work as they embody what it means to wear the designs of Best Clothing Company.

He referred to this as the “Young Bull on the Rise” campaign, which uses photoshoots and commercials to feature local talents.

Best Clothing Co. Brand does not plan to stop anytime soon. The team hopes to visit college campuses, sell clothing in the University’s Campus Store and open stores across the country. With a women’s line in the works and the rest of the clothing line “God’s Blueprint,” to be released soon, Young, Carcamo and Broadus stay busy.

“I hope it takes me to the top, whatever the top is,” Young said. “I don’t want to put a limit on it. Now I want to do more than have money to eat, I want to inspire.”