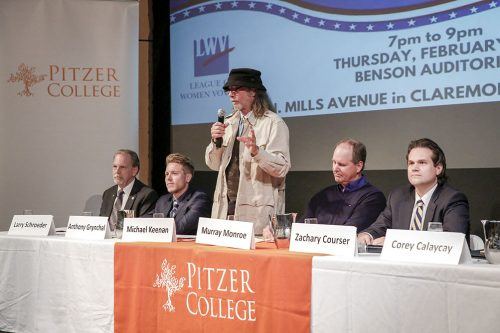 The candidates gave opening statements and answered questions provided by the League of Women Voters and the audience.

Candidates were asked about their stance on Measure W, which would authorize Claremont to issue $135 million in local bonds to buy the Claremont Water System from Golden State Water Company.

Claremont residents pay more for water than residents of nearby cities not under the company. Claremont wants to seize control of their water through eminent domain.

Most of the candidates supported Measure W and the city council’s decision to appeal the decision of LA Superior Court Judge Richard Fruin, who ruled against the city.

Grynchal said that bond financing would result in increased water rates, and that the city should lower water rates through the creation of a water district.

Candidates were also asked their opinions on Measure H, a Los Angeles County ballot measure that pushes for a 0.25 percent sales tax to fund services for the homeless.

The candidates supported the measure. Prattella said there should be more direct oversight over how the funds are allocated.

Grynchal and Calaycay said that there was a need for transitional housing, which Measure H could provide the funds for.

Calaycay said that, while he supports Measure H, he acknowledges valid arguments against it.

“I’ve also heard from more business people who are concerned, because we are a city in L.A. County, and of course, we already have a 1 percent higher sales tax as a result of Measure M, with transportation, this will make our sales tax much higher than in Upland and San Bernardino County,” Calaycay said. “So in regards to some items, some people could shop over the border in San Bernardino County. It could have an unintended consequences on our consumers here in Claremont. We just have to keep that in mind.”

Monroe said that there was a distinction between housing, which the other candidates brought up in their answers, and services, which Measure H will fund. He said that the quarter percent tax will most affect those who earn the least.

“There’s no need to create a spotlight and say we’re a sanctuary city and then now become a spotlight,” Prattella said. “It can actually create more danger for them. No. 1, we do lose federal funding, currently right now up to a half a million dollars, and No. 2, which is major, if Trump does what he says he’s going to do, then we won’t even have FEMA funds.”

Monroe supported the idea of a sanctuary city, saying that it was “morally the right thing to do.”

“Already, they’re breaking down doors, taking aunts away from families,” Monroe said. “Have you ever heard of such a thing? I mean, what is this, Nazi Germany or something like that? I’m appalled by this. Yes, we should stand up. So what if we lose $460,000?”

After the series of questions, and before the closing statements, Pitzer student Jacqueline Aguilera went on stage and held up protest signs.

“I held a sign that says ‘Silence is Violence,’ referring to the need to make Claremont a sanctuary city as well as a sign that said ‘Trans Rights Matter’ and that was talking about the need to protect our students, due to the recent change in Title IX policies, which don’t protect transgender students,” sophomore mathematical economics major Aguilera said after the forum.

Robert Salinger, who moved to La Verne from Madison, Wisconsin, said he plans to vote for Courser and one of the incumbents. He said he has not decided which incumbent he will vote for.

Lynne Marsenich, who identified herself as a progressive Democrat, said she supports Schroeder. Marsenich said that she was not satisfied with the candidates’ statements surrounding sanctuary cities.