By Campus Times Editorial Board, Natasha Brennan on March 10, 2017 in Editorials, Opinions 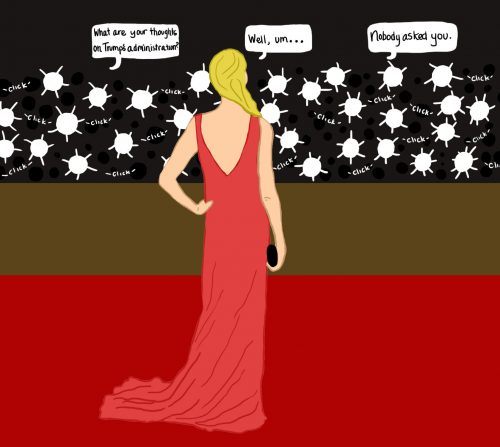 The current political climate has people becoming more vocal about their political views and taking action, and celebrities and professional athletes are no exception. Since Donald Trump’s election, many have been voicing concerns and people have told celebrities and athletes to stick to their professions.

Despite people in the spotlight being known for work that is not political in nature, that does not give others the right to bash them for voicing their views. Celebrities and athletes are using their influence to bring awareness to political issues they are passionate about as people.

“It was that moment when the person asking to sit in the most respected seat in our country imitated a disabled reporter,” Streep said. “Someone he outranked in privilege, power and the capacity to fight back. It kind of broke my heart when I saw it, and I still can’t get it out of my head, because it wasn’t in a movie. It was real life.”

Of course, her speech did not go uncriticized. Similar comments circulated about other award shows in which celebrities made political comments.

In the article “Silence is Golden! Why Celebrities Shouldn’t Talk Politics at the Oscars,” Ashley Pearson from Heat Street said that celebrities should not address politics at an awards show that has nothing to do with politics.

“I object to their unsolicited guidance, particularly on a night that has nothing to do with politics,” Pearson said. “I want to see beautiful people with great hair that have starved themselves for months.”

It is hypocritical to say that celebrities and athletes should stick to their professions, especially when President Trump was a celebrity prior to being elected. Trump was made famous on the reality show “Celebrity Apprentice.”

Bedoya has also voiced his political views. In an interview for Sports Illustrated, Bedoya said he refuses stay silent.“I’m not just a guy that’s just going to stick to sports,” Bedoya said. “It’s just a shame. A lot of stereotypes are being thrown around that creates this irrational fear.”

In such a divisive political climate, celebrities and athletes also have the right to voice their opinions, as they are citizens and people first, professionals second.

Alumnus rises in the ranks
Artist adds layers to photos