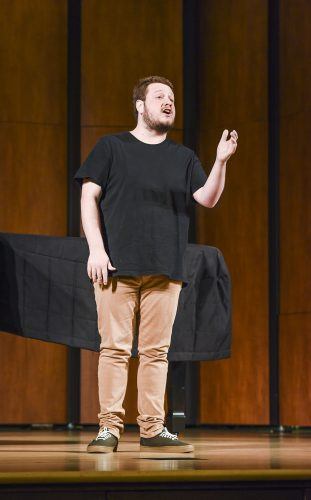 Being involved on campus does not go unnoticed. That is the case for 21-year-old senior music major Terry Dopson.

As a transfer student, he took it into his own hands to become involved and make the transition a smoother process.

Ready to graduate in May, Dopson has been involved in the transfer club and the music department. He is also involved as a presidential ambassador and a student ambassador.

At age 11, Dopson discovered his passion for music and theater, when he performed for the first time in a community show.

“That was the first time I ever performed on stage, and honestly the light bulb went off in my head that this is what I wanted to do for the rest of my life,” Dopson said.

“I had never felt so excited about something, I finally felt like I had a sense of purpose.”

Aside from his deep love of theater, Dopson has been a part of choir since elementary school. He continued his choral career and education all the way to the college level.

He came to the University on a performance scholarship for music.

The performance scholarship is awarded to two students within the disciplines of music, theater, art, TV production, speech communications and photography.

The scholarship is offered to freshmen, transfer and international students.

Finishing off his last year at the University strong, Dopson has had the opportunity to be a part of the presidential ambassador program.

As a presidential ambassador, Dopson and nine other volunteers represent the University as a whole at different events and network with donors.

Dopson said that his favorite part of the program has been meeting plenty of new people as well as getting to know President Devorah Lieberman.

To the donors and other significant University affiliates, Dopson shares his experiences and accomplishments with the music program and life as a transfer student.

During his time at La Verne, Dopson has also taken a position as a student ambassador.

The position entails giving tours to prospective families and students, answering questions at the front desk of the Office of Admissions and organizing events for students such as Spotlight Weekend and Preview Day.

Candyce Coleman, associate director of transfer admissions, first came across Dopson when she received his application from Fullerton College.

Although she had only spoken with Dopson over the phone a few times, she knew he would be a good fit for the program. She encouraged him to be a student ambassador.

“We look for students who are passionate about the University, who are involved on campus and want to get involved with the younger students,” Coleman said.

“Terry has been an amazing asset to our office. He has great people skills and I know he says he feels like he’s on stage sometimes when he is giving tours.”

Dopson has been a major asset to the University’s music department as a part of choir and this year’s Acapella Barbershop club. Dopson said it has been a really rewarding experience.

As a new member of the barbershop club, he was overwhelmed at first because it is a challenging art.

Carol Stephenson, instructor of vocal music and adviser of the barbershop club, has been a positive role model for Dopson, helping him quell any anxieties.

“He is very self-motivated,” Stephenson said. “He does a lot of independent work, as well as positive energy that is very infectious. It’s awesome to have a Terry in the room.”

The life of a transfer student is not always the easiest. The transition between schools, making new friends, understanding a whole new culture and learning the layout of a different campus makes it very difficult.

“We don’t have a transfer center at La Verne,” Coleman said. “We need more transfer awareness on campus.”

The Transfer Club works to give any student, not just transfer students, the resources to ease into the university life. Working closely with Coleman and about 30 other members, the club create events and host meetings to make students feel well at home.

Dopson will be finishing off the year with a solo recital. He will be singing music from the genres of opera, classical, and musical theater. The solo has been in the works for about a year. Dopson will make his performance memorable by performing in Morgan Auditorium on Saturday at 7:30 p.m.

Correction
In an earlier version of the story “College career ending on high note” (March 24) Terry Dopson’s age at his first performance was misstated. He was 11. In the original photo caption “Mandoline” was misspelled. The Campus Times regrets the errors.