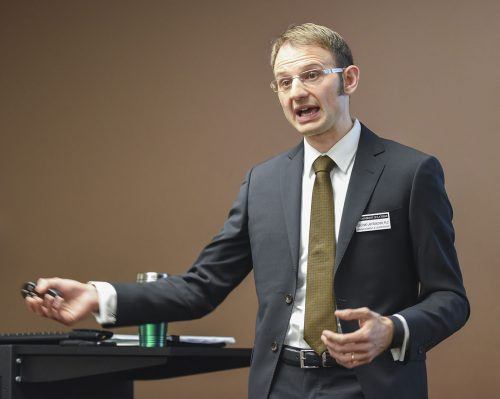 Giacomo Laffranchini, assistant professor of management, discusses “The Impact of Socioemotional Wealth on Decline Stemming Strategies in Family Firms” in the President’s Dining Room Tuesday. Laffranchini offered two hypotheses to provide insight on socioemotional wealth, a problem that occurs when family firms prioritize the personal needs of family members within the business over the financial well-being of the business. / photo by Alexandra Arkley

Assistant Professor of Management Giacomo Laffranchini presented his research on how nonfinancial objectives shape the decisions of family firms that are trying to financially recover at noon Tuesday in the President’s Dining Room.

Laffranchini described the common methods businesses employ to stop financial decline, such as cutting both costs and assets and attempting to improve their sales.

“Family owned businesses employ roughly 50 percent of the U.S. workforce, so it’s incontrovertible that we cannot neglect family-owned businesses as a form of organization,” Laffranchini said.

When making decisions in turnaround situations, family owned businesses will take into account family’s power, emotional attachment and desire to create a family legacy through the business.

Laffranchini introduced the concept of socioemotional wealth, or SEW, which he defined as “benefits that are non-economic, and yet critical for the family principal welfare.”

Laffranchini said the theory ignores the role of the owning family in management, and supplemented it with the “SEW preservation perspective,” which explains business strategies in terms of whether or not they will gain socioeconomic wealth.

Restricted socioeconomic wealth, or SEWr, benefits the immediate family, while extended socioemotional wealth, or SEWe, includes long term benefits, such as the survival of the business over several generations, the development of it’s reputation and standing and the maintenance of the relationship between internal and external stakeholders.

Laffranchini used accounting data to study 416 businesses with family involvement for two or more generations and significant family ownership. He split SEW in five dimensions: family control and influence, identification of family members with the firm, binding social ties, emotional attachment of family members and renewal of family bonds to the firm through dynastic succession.

“All in all, our results suggested that family owned businesses appear to frame their decisions in order to preserve the support of their stakeholders, which are critical for the family in order to keep deriving SEW, depending upon whether they chose SEWe or SEWr,” Laffranchini said.

He also said that the family owned businesses’ strategies change depending on which type of SEW the family prioritizes.

“If I am a family member and I am pursuing SEWr, I don’t care if my offspring are intellectually gifted or not, I want to give them employment opportunity, and therefore, regardless of that qualification, I will find a position for them in my own firm. That’s an example of SEWr,” Laffranchini said.

“An SEWe, on the contrary, or extended SEW, would be to provide particular benefits for my employee, because I believe that they are part of the family. Although they are not a family member, I see them as a long lasting stakeholder of the firm. From an SEWe standpoint, the family owned businesses are found to be more socially responsible than non-family counterparts because there are implications in terms of legitimacy and reputation of the firm.”

Assistant Professor of Finance William J. Hippler said that he was interested in the subject of conflicts between agencies within a business, which he called “agency conflicts.”

“What (Laffranchini’s) companies are, essentially, are companies that have a management team and an ownership structure where the company’s essentially controlled by one group of people who might be pursuing nonfinancial goals,” Hippler said.

“My question was about ‘what if I’m one of these small shareholders, and I don’t control the company? Might that affect me negatively if they’re able to use their influence to pursue some non financial goal that maybe I don’t agree with?’”

“Sometimes you have groups of people trying to solve a regional transportation issue, like who pays for the Goldline, so there’s a community identity issue that maybe socioemotional wealth plays out in different ways,” Godwin said.