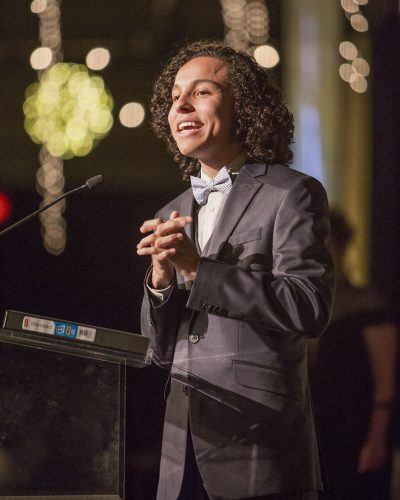 Sophomore communications major Rudy Amaya talks about the importance of community support March 11 at the Scholarship Gala held at the Fairplex convention center. The gala is held every year to raise money to fund scholarships for current and future students. This year the University raised more than $750,000 from more than 1,000 guests. / Taylor Griffith

The event, which took place in the Sheraton Fairplex conference center in Pomona, began with an opening speech by emcee Keisha Grant, La Verne alumna of the year and NBC News anchor in Connecticut.

The La Verne Chamber Singers performed after the opening greetings from Grant.

And president Devorah Lieberman spoke next to thank everyone for coming.

“Your continued support for our students and University is what paves the way for our future,” Lieberman said.

Lieberman emphasized the importance of the scholarship gala to raise money to provide scholarships for students.

“It is with excitement and pride that we boldly move forward,” Lieberman said.

“Our purpose tonight and into the future is to continue providing scholarships that are so critical for our students that allows them the opportunity to attend a university and to attend the University of La Verne.”

Providing the student perspective at the event, Rudy Amaya, sophomore communications major with an emphasis in radio, gave a speech on how his ULV experience has influenced his life goals.

Amaya shared his experience at La Verne and how it transformed his views on community and what it means to be a part of one.

“The University has shifted my perspective from what can they do for me to what can I do for us, it has helped me to understand that community starts with the service we provide to others,” Amaya said.

He also shared his anxieties about covering the cost of tuition and other school expenses. Amaya said it was through scholarships – several funded from the gala and other donors – that he was able to fund his education at the University.

Amaya said he was humbled to speak before the audience and provide the student side of the perspective to the guests.

“I think it humanizes the donor process,” Amaya said. “They (donors) give money but they don’t see the faces of the students and I was honored to be the face to represent students.”

The auction portion of the gala began after Amaya’s speech.

Stephen Morgan, former University of La Verne president and current president of University of the West, and Art Ludwick, a recipient of the 125 influential individuals honor, led the auction. The items auctioned off were a dining experience for a party of 20 at the Sheraton Fairplex Farm, a diamond pendant, a weekend stay for two at the Ruby Springs Lodge fishing resort in Montana and a trip to Las Vegas for eight guests on a private jet.

Lieberman donated an additional auction item of the student-designed jewelry she wore that night.
The 125 honorees were selected because they live by the University’s core values, Lieberman said. Influential individuals were selected from a pool of nominations and include faculty, staff, board of trustee members and alumni.

La Verne alumnus Tahil Sharma was among the 125 individuals honored.

“I’m humbled more than anything else,” Sharma said. “I feel astonished because after seeing a lot of the honorees I don’t feel at their caliber.”

Sharma said that although he is still unsure of who nominated him for the honor, he is thankful.

“More than recognizing me, I’m thankful that they recognize my parents for the hard work and dedication to raise me to become the person I am today,” Sharma said.