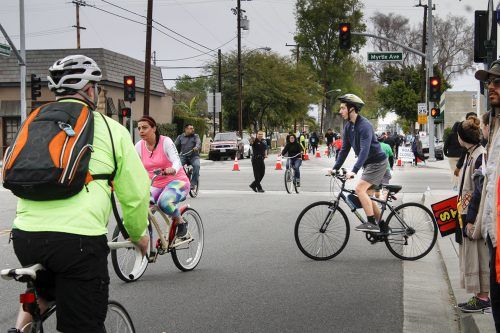 The Monrovia Gold Line Station becomes a busy intersection for cyclists at the 626 Golden Streets event Sunday. The streets were closed to car traffic by the Los Angeles County Metropolitan Transportation Authority to promote alternative transportation. Most of the 50,000 participants were on bikes, but many also skated, walked, jogged and scootered their way from Azusa to Pasadena. / photo by Tyler Deacy

Over 17 miles of road was cleared for bikers, walkers, skaters, runners and joggers Sunday from South Pasadena to Azusa for the 626 Golden Streets presented by Metro.

626 Golden Streets, the brainchild of South Pasadena City Council Member Michael Cacciotti, gets its name from the area code that spans over the cities on the route.

The event was originally scheduled for June 26, 2016, but was postponed due to the San Gabriel fires.

Hubs with food trucks, information booths and music from radio stations dotted the route. Police stood at each cross walk to monitor traffic and ensure the safety of the 626 Golden Streets participants.

Booths representing different companies situated themselves between the hubs along the route.

One booth offered free Monster, and another booth representing Costco offered water, oranges and information about membership. Participants in the 626 Golden Streets stopped at Tardino Bros on the corner of Azusa Avenue and Historic Route 66.

The day started overcast, with the temperature somewhere in the 50s. By midday, it started raining. Though some participants took refuge in Tardino Bros, they were not deterred from continuing their walks and rides along Historic Route 66 to the end of the 17-mile stretch of road.

La Puente resident Jared Moreno said he came to 626 Golden Streets for the first time after hearing about the event through a Facebook invite.

“This is the first time I’ve participated in this bike ride,” Moreno said. “But I’ve been to other bike rides. I’ve been to a Huntington Park one, and Compton, that area, South L.A.”

Alhambra resident Rebecca Nevarez said she has participated in CicLAvia, a biking and skating event like 626 Golden Streets that took place in Culver City and Venice, and rides bicycles as a hobby.

“I went to an event last year in San Gabriel,” Nevarez said. “It was a Chinese New Year’s celebration, and there was a booth, and because I was familiar with CicLAvia, the events in Los Angeles, they were explaining that there was going to be an event in San Gabriel Valley, and I’ve been wanting this for a long time. I live very close to Huntington Drive and it’s the perfect thoroughfare for this kind of thing.”

“This is my first 626 ever, but I’ve been to Azusa before,” Hinojosa said. “I’ve been riding over a decade. I like the mile markers. CicLAvia didn’t do the miles.”