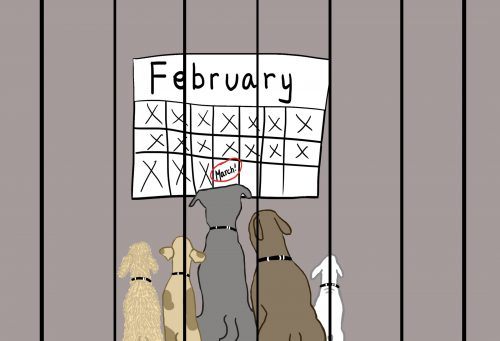 Nearly a year after their dog died, Fontana residents Keri and Greg Martin visited the Inland Valley Humane Society and Society for the Prevention of Cruelty to Animals for a new dog to take home. After losing her beloved pet – one she raised for 17 years since the dog was just four months old – Keri Martin said she has finally healed enough to raise another dog.

“I have two kids, and it’s time,” she said. “I miss having a little dog jump in my lap. I miss having the calmness of it – or not so calm.”

The Martins discussed small dog breeds and planned their schedule around the days they could return to the shelter for the early morning adoption.

With the recent installation of a backyard gate, their family can finally welcome its newest member.

Since 1949, the Inland Valley Humane Society has served the La Verne, San Dimas and Pomona communities, matching potential pets with families like the Martins and helping foster strong emotional bonds between people and animals.

For decades, shelters across the country have offered services such as fostering, microchipping, vaccinating, and housing lost pets until their owners return to reclaim them.

Each February shelters celebrate World Spay Day, an attempt to lower the number of animals who end up in shelters by making spay and neuter procedures more affordable. The month is dedicated to low-cost microchipping and adoptions. Employees spend extra time marketing these events and providing care.

Los Angeles Animal Services reported February to be one of the lowest months for dog adoptions. World Spay Day and related events may be celebrated to boost the adoption rates while simultaneously lowering the number of animals in the kennels, making February more important than ever.

Misty Reiss, head of community outreach for the Pomona shelter, has dedicated years of her time and energy to the welfare of animals.

She and her team members spend hours rescuing and healing dogs and cats, moved by a love for animals and a type of compassion that may be evolutionarily engrained in humans.

For Reiss, this lifelong commitment is more than just caring for animals; it is a bond that exists between herself, the shelter staff and the animals they rescue.

Reiss, a former police officer, started her work with animals 15 years ago as a humane officer and later as the adoptions coordinator. She has rescued animals from owner relinquishment, when owners move or do not realize the commitment of owning a pet, and abuse and animal hoarding. Reiss spends 45 to 50 hours a week at the shelter and typically sees “unsocialized” pets who had limited interaction with other animals, neglect and many strays. While abuse and owner relinquishment have decreased significantly, the staff stays busy, finding homes for all the strays that take shelter in the kennels.

“Our goal is what we call ‘g-to-z,’ ‘getting to zero,’ where no healthy, adoptable animal is ever euthanized,” Reiss said. “We are moving forward, and we will get to zero. Our goal is to get them adopted and keep them at that location.”

While the ASPCA reports that 2.7 million animals are adopted from shelters every year, February may be one of the lowest months for pet adoptions nationwide. Adoption rates drop after Christmas at the Inland Valley location, Reiss said.

During the months after the holidays, Reiss and her fellow shelter staff members spend even more time screening potential homes for possible incompatibilities between the residents and the adoptive animals, including housing issues or other aggressive pets.

For Chihuahuas and pit bulls, the breeds that fill most of the shelter’s kennels, these months are crucial. Low-cost spay, neuter and microchipping procedures lower the population for these breeds, while the shelter staff works tirelessly to find homes for sheltered animals, including educating the community on how to properly raise pets.

No matter its state or health, no animal is turned away from the Pomona shelter, including animals with a smaller chance of survival. Reiss said she and the shelter staff must find their own balance between connecting with animals and getting too attached, when sick or injured animals are brought to the kennels, which can leave them emotionally drained.

“There is compassion fatigue,” Reiss said. “We are very upfront about it. We help each other out. It’s like a big family here. That’s what’s kept me here so long. We do everything we can. I’ll walk by sometimes and see a kennel attendant just sitting in there. Sometimes it’s just a matter of sitting there and getting its trust.”

It may not be a coincidence that pet owners, shelter staff and other animal lovers connect so easily with their four-legged friends. Reiss’ philosophy of treating a pet like a member of the family identifies a deeper relationship with animals that can be related to the concept of biophilia.

“Biophilia,” according to the book with the same name, is “the innate tendency to focus on life and lifelike processes.” The book, by sociobiologist Edward O. Wilson, was originally published in 1984.

Wilson’s theory of biophilia conceptualizes this human need to bond with animals as the product of human mechanical development and growth of culture: as the world advanced, so did human wonder and respect for other life.

“I think it’s how we’re evolved as a society,” Reiss said. “There’s more awareness of pets and their needs. It’s not just a watch dog anymore. People are becoming more aware of treating animals like family.”

Reiss was raised around animals and recalled memories of her childhood dog who, if left behind while her father hunted, would tear up only her father’s belongings.

Other psychologists suggest that exposure to animals during childhood leads to stronger affection towards animals later in life.

In a 1993 study for Animal Welfare, authors Elizabeth Paul and James Serpell surveyed 385 university students about their pets and attitudes toward them from their memories as children into the present. By studying the students’ involvement in environmental organizations, charitable donations and how important they considered their pets to be in their lives, the authors analyzed the students’ empathy over time. The authors then studied pet ownership across the surveyed students and compared the results.

More than the family pet

These days, most of Reiss’ time is spent educating children and adults on the proper care and treatment of animals. She said owning a pet is about compassion from both the pet and the owner. The education she offers is crucial in fostering the strong familial bond between animals and their owners.

“It’s a two-way-street,” Reiss said. “It’s not just a matter of feeding them and housing them. Animals do have emotion, and they can play.”

“(Dogs) don’t talk back,” Joe Chavez said. “They’re devoted, constant companions. Something different every day with them, and they have their own personality. You’ve got to learn them.”

The pair visited Las Vegas the weekend prior and left Mozzie at a dog hotel.

Despite Mozzie’s anger, Chavez picked him up and cuddled with the squirming schnauzer.

A few kennels away from the Chavezes, Pomona resident Mariana Flores waited with her family. Nearly six years ago, Flores adopted her four-month-old Saint Bernard, Penelope, from the shelter. This month, she returned to help her sister and nieces adopt a puppy of their own.

“She’s a family dog,” Flores said. “She’s our baby. It’s so great having a dog. It’s like having a baby, an extra child.”

For pet owners like Flores and the Chavezes, dogs and cats are loved just as much as many families deem their pets to be a child with a personality.

According to a 2012 survey by the American Veterinarian Medical Association, 66.5 million households owned a pet by the end of 2011, with 63.2 percent of pet owners who consider their pet to be a member of the family.

Since Wilson’s publication was first printed, numerous studies focused on expanding this theory and understanding the origin of the human and animal relationship.

The similarities between animals and human babies, including helplessness, soft facial features and the need for social interaction, may play a role in this, explaining why families value an animal’s life as they would the life of a child.

“The human tendency to care and feel empathy for animals may have been a trait that was selected for, as it could reflect a more general capacity to care for human infants,” Amiot and Bastian wrote.

Reiss herself has adopted three dogs from the shelter since she started her work with animals and said it is important to treat pets like members of the family. She said she believes animals develop their own personality when they no longer feel the need to rely on survival instincts.

“It’s like having a four-legged child,” Reiss said. “My little terrier thinks she’s a pit bull in a little body. She’s the apple of my eye.”

Over the years, pet owners have returned to show their appreciation to the shelter staff, grateful for the additions to their homes and the positive impact their adopted pet has made. Reiss said one pet owner still stops by to visit 10 years after adopting her dog, while other families send Christmas cards to the shelter ever year. She cherished the moment when two puppies she found a home for returned a year later for a visit, fully grown and eager to see her.

“You have something to care for,” Reiss said. “You have a being, a reason, a purpose. That’s important for seniors and anyone. It gives people a purpose. Everyone wants to feel appreciated and loved, and sometimes you don’t get that from people. Animals, regardless of species, can be stress relievers. You don’t have to talk; you can just be.”

During the long hours in the Inland Valley Humane Society, when anywhere from 10 to 30 animals are adopted each day, animal lovers face both rewarding and emotionally tolling moments almost daily.

From the Martin’s grief over the loss of their dog a year ago and the Chavez’s familial relationship with their dog Mozzie, to Reiss and the shelter staff with their emotional connections to injured animals, the human and animal bond is present.

Shelter staff and fellow animal lovers may be more inclined to build affectionate relationships with animals since childhood.

During the early months of the year, especially February, these bonds may be more important than any other time.

As new animals enter the shelter system, the efforts to shorten their stay may not be purely disposition at all, and instead may be an ingrained quality in people biologically and psychologically. Fostering these relationships may even build human empathy and appreciation for life.

“I understand them and can read them,” Reiss said. “I know I have a talent to help them, so I might as well use that talent.”