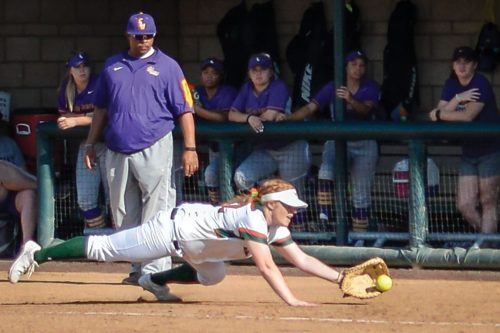 Senior first baseman Alexis Schiff catches a foul ball hit by Makenna Pellerin of Cal Lutheran to get the third out in the top of the third inning March 11. The Leopards conquered the Regals in both games of the doubleheader at La Verne Campus West. / photo by Conor Holahan

The Leopards got things rolling in the bottom of the first, with a double by freshman designated pitcher Katheryn Navarro, scoring the first run of the game.

The Regals answered right back during their turn at the plate at the top of the second inning, where they led off with a double, and brought the runner home with a single.

It was a back and forth battle until the bottom of the third inning, when freshman third baseman Justice Borden launched a three-run homer to deep left center, giving La Verne a 4-1 lead.

Navarro earned the win when stepping on the mound in the sixth inning, holding her opponents scoreless throughout the remainder of the game.

Senior first basemen Alexis Schiff led off the seventh inning with a single up the middle. Navarro then smashed one over the left field fence for the walk-off win, 6-4.

“I need to leave the game feeling like I gave it my all,” said junior second baseman Haley Gomez.

In the nightcap, La Verne took a quick 4-0 lead in the first two innings.

Sophomore left fielder Rachel Ogata lead off the first inning with a walk, and Schiff followed it up with a single.

Navarro then came up to the plate where she produced an RBI double to score a run.

Sienna Kendricks followed up with a sacrifice fly to deep right, bringing in another run.

Borden brought Navarro home when she shot one up the middle, and the Leopards ended the first inning up 3-0.

Ashley Caro got the nod and took the mound in the top of the fourth inning where she silenced the Regals at bats for the remainder of the game.

“My performance was good but it could’ve been better,” Caro said.

“I really relied on my defense to help me out and allowed the hitters to put the ball in play. I wasn’t trying to do anything special since Cal Lu is a decent team.”

Schiff sent one over the fence in the fifth inning. Her homer run was the nation-leading ninth home run.

Senior pitcher Hayley Jaquess, who started the nightcap, was pleased with her team’s performance.

“Our mentality as a team coming into the games were to play to win,” Jaquess said.

“We came into the games in first place and we played like a first place team. We have a target on our backs from last year, and teams know we are good, so now we just have to prove it.”

La Verne followed these victories with back to back loses to Ithaca in non-conference play.

In conference play the Leopards split the series against Chapman ending a three game losing streak by winning the second game, 4-1.

The Leopards are 13-5 overall and 8-2 in the Southern California Intercollegiate Athletic Conference.

The Leopards’ next conference game is Saturday at Campus West. The team will play a doubleheader against Whittier at noon and at 2 p.m.