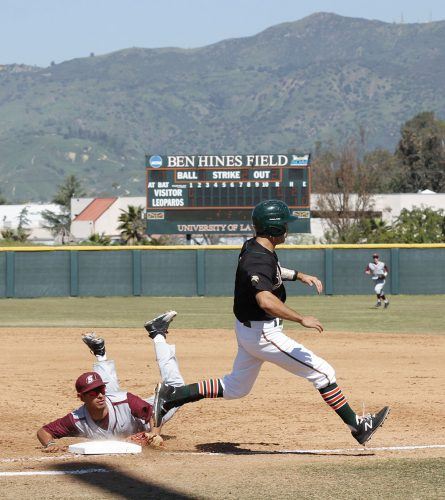 In the first game against the Schreiner Mountaineers, Schreiner sophomore infielder Tomas Garcia is late for the tag on La Verne senior infielder Anthony Gonzalez who singles to first base at the bottom of the second inning. The Leopards topped the Mountaineers in the doubleheader, winning both games 6-1 and 16-7 at Ben Hines Field March 12. / photo by Hannah Burton

The baseball team swept Schreiner, beating the Mountaineers from Texas, 6-1, in the first game and, 16-7, in the second, March 12 at Ben Hines Field.

The Leopards won their first game against Schreiner, giving up five hits and one run.

Things changed in the second game, as La Verne was part of a high scoring affair.

Head coach Scott Winterburn said the second game was different because both teams had to rely more on their bullpens.

“You’re deep into everybody’s bullpen and there wasn’t a lot of quality strikes being thrown in the middle of that second game,” Winterburn said. “So you knew it was just going to be one of those games.”

Sophomore pitcher Christopher Arcos started the second game for La Verne and gave up five runs before being pulled in the third inning.

“He’s a good pitcher,” Winterburn said. “He just got out to a tough start and we probably could have got him out of that jam with a good play or two.”

The Leopards’ offense also did not help Arcos, as they managed just one hit in the first two innings.

“We came out a little bit flat,” freshman designated hitter Dylan Alhanati said. “We didn’t have our stuff and everyone got together. We were like, ‘look man, if we’re going to win this thing, we really got to get in it right now.’”

Senior left fielder Jakob Thomas got the rally started when he homered to left field in the third inning, driving in two runs and cutting the deficit to 5-2.

“My prior at bat I walked,” Thomas said. “So I saw all his pitches and I knew what he had, what he was going to throw possibly and I was just looking aggressive on a fastball, and luckily he threw one right in my zone.”

The bases were loaded after senior catcher and third baseman Dylan Lowenstein walked and senior second baseman Justin Wright and Alhanati were hit by pitches.

Schreiner got back on the board in the fifth inning after a fly ball by junior shortstop Kyle Romaguera scored freshman third baseman Josh Gilliam, making the score 6-4.

La Verne responded in the bottom of the fifth with a triple down the left field line by Alhanati, scoring two and tying the game, 6-6.

Douglas hit a fly ball to center field and scored Alhanati, giving La Verne its first lead of the game, 7-6.

The Leopards added a run in the top of the sixth when junior right fielder Nicholas Michaels tripled and scored on a sacrifice fly by sophomore first baseman Christopher Peres, to take an 8-6 lead.

Sophomore first baseman Tomas Garcia scored for the Mountaineers off a La Verne error to pull within one run in the top of the seventh, 8-7.

La Verne added three more runs in the bottom of the eight to take an 11-7 lead.

The Leopards offense did not let up and added five more runs in the last two innings, winning 16-7.

La Verne followed these victories with tough losses to Ithaca and Berry, 13-10 and 13-8. Before bouncing back with a 10-0 victory against Southern Vermont. The Leopards offense has scored 58 runs in the last five games.

La Verne is now 13-7 overall and 7-2 in the Southern California Intercollegiate Athletic Conference.

The Leopards are in a three way tie for first place with Chapman and Occidental.

La Verne will be back in play in a doubleheader against Wesleyan at 11 a.m. and 2 p.m. Friday at Ben Hines Field.

Jose Brambila can be reached at jose.brambila@laverne.edu or on twitter @jozy_brambila7.