By Chris McMahan, Kathleen Arellano on March 31, 2017 in Baseball, Sports 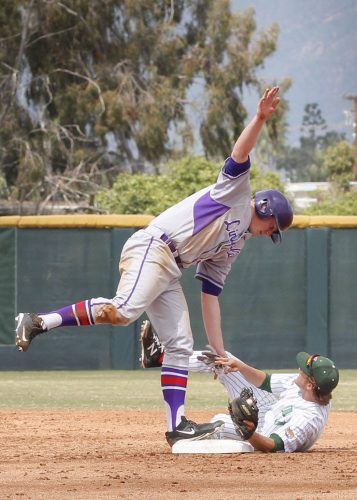 La Verne freshman second baseman Jacob Benson tags out Linfield sophomore left fielder Jared Evans as he tries to steal second base at the top of the third inning, during the first game of a doubleheader. The Leopards lost both games, 5-3 and 5-4, Saturday at Ben Hines Field. / photo by Kathleen Arellano

La Verne has now dropped four in a row, sending their overall record to 13-11.

“When you compete against a good team and lose, you grow from it,” head coach Scott Winterburn said.

Winterburn added that La Verne’s biggest problem in the series was leaving runners in scoring position.

The Leopards left 14 men on base in the first game and 11 in the second.

“We’ve been very tentative as a team,” Winterburn said. “Very tentative in those moments when it’s just pitcher versus hitter and there’s nothing to do but hit. We’ve taken too many strikes and we’ve not been the aggressor. We paid the price for it with two losses.”

In the first game, freshman pitcher Brenden Bergen gave up six hits and three earned runs before being pulled in the second inning.

After giving up four runs in the first two innings, the Leopards held Linfield to just one the rest of the game.

The offense for La Verne, however, managed only six hits and three runs.

“Linfield is a good team and we had plenty of opportunities to score,” senior first baseman Anthony Gonzalez said. “It’s frustrating because we practice these things all the time.”

Senior catcher Ryan Pladson got the scoring going for Linfield in the second game with a two run homerun in the first inning, giving the Wildcats an early 2-0 lead.

It was freshman pitcher Cody Norman’s only mistake of the game, as he gave up just one more hit following the homer.

La Verne’s offense was not able to help Norman, as they did not get on the board until the fifth inning.

Norman was replaced in the sixth inning by freshman Nico Gonzalez, who found himself in trouble after Linfield loaded the bases.

Linfield managed only two runs, but extended its lead, 4-1.

The Leopards offense responded in the bottom of the sixth, as Christopher Ligot drove home junior left fielder Mark Abbate after a base hit up the middle.

Anthony Gonzalez continued the scoring with a single of his own, scoring Ligot and Lowenstein to tie the game, 4-4.

The pitchers for La Verne and Linfield did not give up a run after the sixth inning, sending the game into extras.

“I was getting a little tired,” Gonzalez said. “I missed my spot, left a pitch a little bit up.”

The Leopards had a chance to respond in the bottom of the 11th, but ended the game with two men on base.

Even with the losses, the Leopards have a 7-2 conference record as they return to SCIAC play against Occidental at 3 p.m. Friday at Ben Hines Field. The series with the Tigers will continue with a doubleheader starting at 11 a.m. in Thousand Oaks.