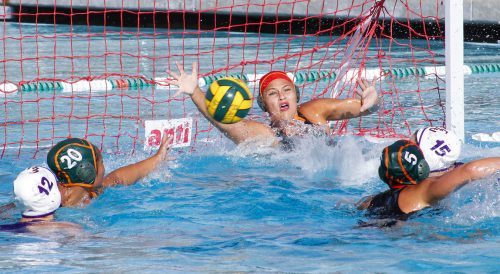 The game had a quick start, with the Leopards scoring their first goal against the Regals four minutes into the match.

Cal Lutheran quickly tied it with a goal by freshman attacker Christin Hirn.

La Verne pushed for a strong defense as the score kept increasing, with the Leos in the lead.

The first half ended 5-4 in the Leopards’ favor. With such a close score, the team made it its mission to work harder to take the ultimate win.

Senior center Megan Little said she is all about working as a team to reach victories.

“Our goal is to stay together as a team and put all we got into our offense and defense,” Little said.

Little scored three goals for the Leopards during Wednesday’s game against the Regals.

Senior utility Heather Barba said she wants to leave her last season on a high note and as a great role model to her team.

“Never lose yourself, when things go wrong always remember that at the end of the day, in this aspect of our lives, we still have time to progress,” Barba said. “It’s a learning process of knowing what’s best.”

Co-head coach Erika Vargas said she wants the team to come out hard and execute the best plays before the SCIAC tournament.

Vargas said she wants to instill the skills necessary for the team to take the victory in every game.

“You can’t stop even though you think it was going to be easy,” Vargas said. “You’ll get obstacles and you have to overcome them. Don’t play down others because that gives them the opportunity to capitalize on your mistakes.”

This season’s goal is to become the first women’s water polo team in La Verne’s history to win the championship game in the SCIAC tournament.

The Leopards are 9-8 overall and 3-1 in conference play, good for second place in the league.

The team is currently one game behind Whittier for first place in the SCIAC. The Poets currently have a 3-0 conference record.

The Leopards will make another splash against Whittier at 11 a.m. Saturday at the La Verne Aquatic Center.