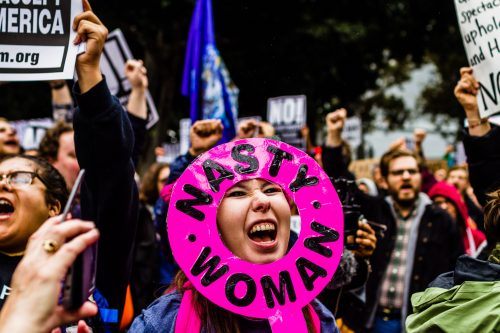 Sporting a “pussyhat” in support of the Pussyhat Project, Laurel Trotter makes her voice heard through her “Nasty Woman” female symbol. Trotter was a demonstrator at the Not My Presidents Day rally on Feb. 20 at Los Angeles City Hall. / photo by Benjamin Camacho

text and photography by Benjamin Camacho 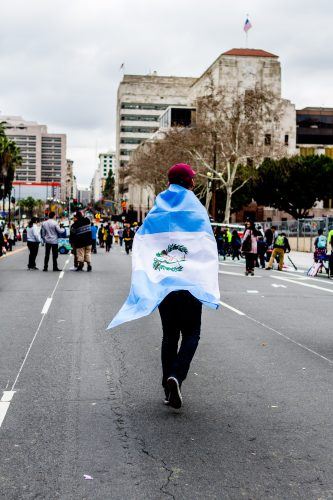 During the Free The People Immigration March at the Los Angeles City Hall, a demonstrator from Argentina wraps his home country’s flag around himself. “I have never felt so attacked in all my years in this country,” said Santiago Garcia, “This is why I march today.” This photo was taken moments before aggressors with megaphones began to disrupt the peaceful protest. / photo by Benjamin Camacho

The protests began on Inauguration Day. Enter protesters in the streets. A collection of people who decided it was important to “refuse and resist”: Black Lives Matter, LGBT, indigenous people, Chicano, Muslim, Asian, Caucasian, Anarchists, Communists, unions, feminists, the undocumented, educators, public servants, anti-fascists, veterans, scientists, the spectrum that makes up the people organized in downtown Los Angeles outside of City Hall and in the surrounding streets.

Thousands of people swarmed the steps of City Hall, chanting in solidarity against the new administration.

Across the country we are seeing new momentum running perpendicular to the new administration, with enough energy to pose progressive change. Expressing opposition in this manner proves to the government that thousands of people are not in line with the results of an election.

During the Not My Presidents Day rally, which took place on Presidents Day at Los Angeles City Hall, cars zoomed past the demonstrations, sometimes blaring their horn in support or in opposition. At times, the rallies may seem like a crowd of people yelling, or just noise, but those who participate have their own stories and reasons for becoming part of the movement.

“I’m here to fight for the rights that my parents have, they cannot fight for themselves out of fear,” said Paola Salas at the Free The People Immigration March Feb.18, in Los Angeles. “I’m the voice of my parents’ fearful silence.”

Thousands in the Free the People March carried signs and chanted from Pershing Square to City Hall.

Each group brought in a new chant.

Chicano marchers brought “Education, not deportation!” to the rallies. This was one of the main chants at the Free The People Immigration March.

The National Anti-Fascist Organization brought “No Trump, no KKK, no fascist USA!” They had a presence at the Not My Presidents Day rally.

Community is built through these words and is practiced through growing political organizing.

At the rallies, people from organizations such as the Anti-Fascist and Free The People organizations spread the word about future happenings and town hall events, which can bring senators to hear the people’s concerns directly.

Data from the Pew Research Center, a nonpartisan research firm, continues to show a trend in political polarization as the year continues. According to People-Press: “Republicans and Democrats are more divided along ideological lines – and partisan antipathy is deeper and more extensive – than at any point in the last two decades.”

One can only speculate from where we stand today as a nation and a people, united or divided.

Organizing, protesting and networking is the foundation for change in a democratic society.

Benjamin Camacho can be reached at benjamin.camacho@laverne.edu. 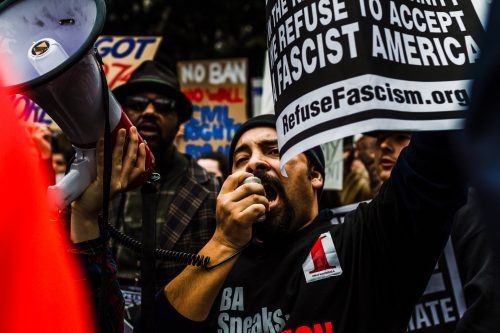 Federico Garcia of the National Refuse Fascism Organization delivered an empowering speech at the Not My Presidents Day rally to the demonstrators about why they need to continue to reject the Trump Administration, as well as continuing to organize. “We are here to reject, refuse, and impeach a fascist regime,” Garcia said. “We must keep fighting together if we are to see any change.” / photo by Benjamin Camacho 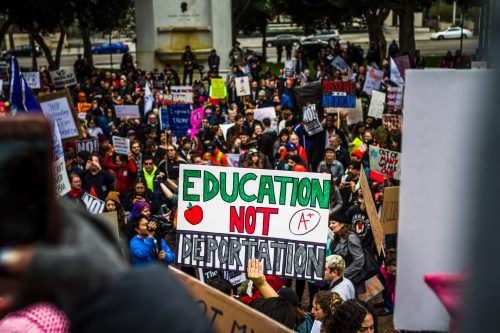 At the Not My Presidents Day rally in Los Angeles on Feb. 20, demonstrators express their misgivings about secretary of education nominee Betsy DeVos. / photo by Benjamin Camacho