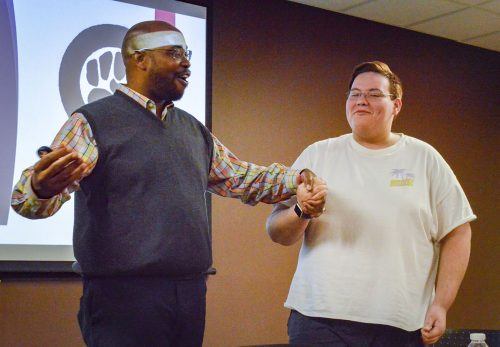 Issac Carter, assistant professor of education, and sophomore Andrew Morem stand and proclaim “We are feminist!” at the end of the lecture in the President’s Dining Room Tuesday. In his lecture, “What are the Constraints of Men Adopting a Feminist Paradigm? Where the Real Men At?” Carter discussed the myths, assumptions and the true ideas of being a male feminist. Carter and others are in the process of developing a male feminist group on campus called Real Men. / photo by Janelle Kluz

Feminism and equality were highlighted as students gathered to speak on the difficulties men endure in adapting a feminist paradigm Tuesday night in the President’s Dining Room.

The event was held by Assistant Professor of Education Issac Carter in honor of Women’s History Month.

Carter began his presentation by asking the crowd what feminism meant to them.

He proceeded by telling the students that he identifies as a feminist man.

“My grandma was a feminist, my mom was very involved in local community activist endeavors for education and for police brutality, those experiences shook me,” Carter said.

He spoke about the 1970s feminist movement and emphasized issues that African-American women faced while fighting for equal rights, both in gender and race. Carter also spoke about intersectional feminism and the issues women face with overlapping identities such as race, class and ethnicity.

Senior education major Brianna Camarano said that any movement needs people who have been affected to stand up for others, especially those who are not in those minority groups.

“For the civil rights movement, you needed white people to stand up and say ‘Just because we socially label them as a different race that doesn’t make it okay to disenfranchise them,’” Camarano said. “Women need the same thing. Women need men to stand up for us and say, ‘Hey, they deserve equal rights too.’”

Carter also spoke about author bell hooks, who fought for feminism to help get rid of sexist exploitation and oppression.

Camarano said the media is also to blame because it shines a bad light on feminism and creates misconceptions.

“We have rape culture here in the U.S. where women are highly sexualized through the media,” Carter said. “That creates preconceived perceptions that women are here to serve men, their value comes from their external appearance.”

Junior business administration major Andrew Moreno said that the fundamental understanding of feminism will change people’s perceptions of the movement.

“I think the definition of feminism definitely needs to be more mainstream,” Moreno said. “As Issac Carter said, there’s so many misconceptions and myths. Anybody can be a feminist, all you have to do is believe in equal rights.”

Carter ended his lecture by having the men in the crowd stand up and yell, “We are feminist men.”

Humberto Fabian can be reached at humberto.fabian@laverne.edu.