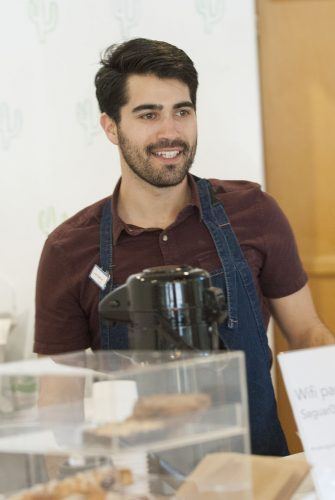 Surrounded by white walls speckled with light green cacti, Jeremy Jenewein, Cactus Coffee owner, tops off a cup of coffee with latte leaf art before flashing a blinding smile as he welcomes fellow java drinkers to his new coffee shop.

Jenewein took over the space, which previously housed Coffeeberry, on Feb. 1. With help from his friends and a few contractors, he worked 12-14 hours a day to transform the shop in under two months.

“I’ve seen Coffeeberry change hands two times and nobody ever put any money into it,” Jenewein said. “It was like seeing a little baby in the gutter and nobody helping it. They would fix the surface things, but not the layout or the big things.”

Gone is the large red coffee roaster, and the wooden counter tops that once filled the space have been recycled into shelves for plants. A quirky blend of eclectic items like an old fashion television on the fritz, pictures of animals dressed as humans and a neon sign Jenewein made that reads, “coffee over everything” fill the room.

Eight tables strategically line the inside perimeters of the shop along with a large black sofa adding a comfortable feeling to the neutral colored space. Outside, bar stools are horizontally placed below a wooden counter, inviting coffee drinkers to sip beverages and greet people walking along D Street.

The menu offers a variety of options such as lavender lattes, espresso, and iced agave mint coffee ranging from $2.50 to $5.

“I think it’s very refreshing,” Norco resident Drew Newman said. “It has a light, airy atmosphere; I like the plants they used for decorations and the coffee is amazing.”

Jenewein said the shop did not have proper working equipment until the day before opening and he expects more coffee grinders to arrive soon. Until then baristas are weighing the coffee by hand.

Jenewein enlisted his friends to help him paint, put together benches, stain tables and reuse as much material as possible.

“Construction generates a lot of debris and trash so I tried really hard to be efficient and not let anything go to waste, sometimes things just need a little bit of elbow grease,” Jenewein said.

Jenewein grew up in La Verne and has owned a cell phone repair shop above Cactus Coffee for seven years. He says he has been planning, preparing and saving for four years to open something, but was not sure what.

“If you told me a year ago that I would be opening up a coffee shop I would be surprised, but now that I’m doing it, I feel like I was really born to do this.”

Cactus Coffee gets their coffee from a roaster in Los Angeles and the name of the shop stems from Jenewein’s green thumb.

“I feel like people are really afraid to have personality in a business and to have things that are a little rough around the edges, but out here in the suburbs, we could use some more life and expression,” Jenewein said.

The shop already has a designated signature drink called, “cactus juice” and is described as a coffee mojito that includes mint and agave for sweetener.

“I like mint and the way it tastes so smooth in here, it tastes like a summer day,” Ontario resident Cheyenne Jones said.

Upcoming drinks include a vanilla latte made from vanilla stalks, and an earl grey latte.

“I think it’s more relaxed than a Starbucks,” La Verne resident Alyssa Lancaster said. “I’m not a big coffee person, but this is subtle and I like it.”

Lancaster, Jones and Newman were carpooling to work when they decided to stop by the opening.

“I want there to be things for the super die hard people who are really intelligent about coffee, but I also want it to be somewhere the regular, working person can come in and get something they’ve never had,” Jenewein said.

“This is going to be the place that I always wanted La Verne to have,” Jenewein said.