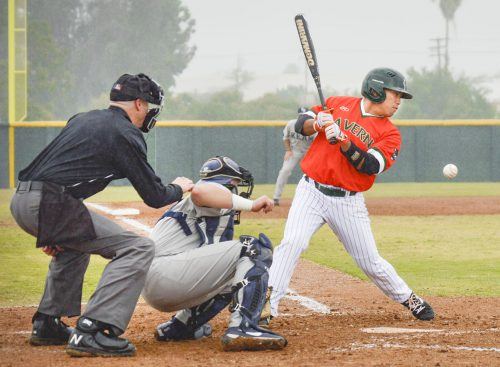 La Verne sophomore rightfielder Christopher Ligot is hit by a pitch in the top of the third inning Sunday. The Leopards defeat No. 14 ranked Kean in the 11th inning on a walk-off single to win 6-5 at Ben Hines Field. The next game will be a doubleheader Sunday against Schreiner. / by Janelle Kluz

It was a huge weekend for the La Verne baseball team, as it went on a three-game winning streak in style, with a no-hitter and a walk-off.

On Saturday, the Leopards faced rival Claremont-Mudd-Scripps in a doubleheader at Ben Hines Field. They defeated the Stags, 5-3, in the first game, with pitchers sophomore Christopher Peres and freshman Cody Norman allowing a combined three runs.

The Leopards faced CMS again later that day for the second game and it was one of the biggest games of sophomore pitcher Christopher Arcos’ career.

It took just 88 pitches in seven innings for Arcos and with the help of the stellar defense, they were able to shut down the Stags and seal the 10-0 victory.

“It felt almost like a dream throwing my first no-hitter because it’s something I’ve never even come close to accomplishing,” Arcos said.

“I had no idea I was throwing a no-hitter until I walked out to the mound for the seventh. Throughout the game, I wasn’t thinking much, just focusing on having quick efficient innings,” he said.

With that stellar performance, he earned the titles of Southern California Intercollegiate Athletic Conference Baseball Athlete of the Week and was named to the D3baseball.com Team of the Week.

The Leopards’ momentum spilled over to Sunday, as they faced No. 14 ranked in the nation Kean University.

The Cougars took a quick 2-0 lead in the top of the first inning.

La Verne tied up the game in the bottom of the third.

Kean took back the lead in the top of the fifth with a 4-2 lead, but La Verne answered right back to once again tie up the game.

The Leopards took their first lead of the game in the bottom of the seventh with a bases-loaded walk to senior designated hitter Jakob Thomas.

With a sacrifice fly to right field in the top of the eighth inning, the Cougars tied the game up 5-5.

After consecutive walks and a throwing error, Kean threatened to score with the loaded the bases and no outs in the top of the 10th.

La Verne freshman pitcher Sean Holt came out of the bullpen ready to take care of business. He sat down the next three batters with back-to-back strikeouts and a grounder.

“I saw that my team needed help, so my mindset was set to winning,” Holt said.

Senior catcher Dylan Lowenstein got the momentum going in the 11th inning for the Leopards with a hard chopper up the middle for a single. He promptly stole second to set the stage for senior shortstop Andrew Douglas.

Douglas smashed another hard grounder up the middle to bring in Lowenstein for the walk off win, 6-5.

“I felt pretty good. I’ve done it a couple of times in my life, but I haven’t done it in a while,” Douglas said. “And doing it my senior (year) and for my boys made it that much better.”

Head coach Scott Winterburn credited Douglas for his hard work all year and ability to drive in runs for the team.

Cruz attributes the team’s success to playing with confidence.

“I didn’t know they were nationally ranked, but I always come in with a mentality that we’re going to win,” he said.

Winterburn said the team definitely needs to improve on many things for their upcoming games.

The Leopards defend their streak in a doubleheader against Schreiner, with the first game starting at 11 a.m. Sunday at Ben Hines Field.