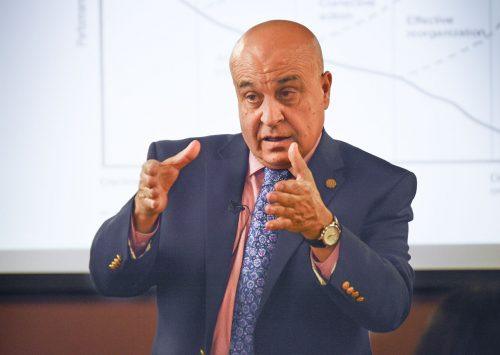 Professor of Management Issam Ghazzawi discusses the importance of communication between management and workers Tuesday in the President’s Dining Room. His lecture, “Organizational Decline and Turnaround: A Conceptual Framework and Research Agenda,” identified business strategies and behaviors that lead to an organization’s decline and ways to develop successful business growth. Ghazzawi’s lecture was part of the University of La Verne’s weekly faculty lecture series. / photo by Janelle Kluz

Issam Ghazzawi, professor of management, addressed possible factors declining businesses face, which can lead to a company’s bankruptcy and proposed suggestions to prevent it from worsening.

About 40 people attended his talk on the “Organizational Decline and Turnaround: A Conceptual Framework and Research Agenda” Tuesday in the President’s Dining Room.

Many people in the workplace may not have a strong hierarchy of officials to report to, thus leading to a decline or lack of organization in companies.

This can eventually lead to less productivity and overall poor management of a company, where they may even declare bankruptcy.

Ghazzawi defined organizational decline as a combination of internal and external challenges that a company faces, including staying in the status quo and lacking strategic leadership.

Ghazzawi said that the term has become more common in big corporations, making it a pressing issue which needs to be addressed.

Many corporations have a long chain of command to go through, making it easy to lose track of possible issues which may need addressing.

“We are very comfortable with the way we do things. We ignore the facts. We don’t pay attention to what the market needs,” Ghazzawi said.

He attributed the combination of a company’s structure and its difficulty in adjusting to its environment playing a huge role in determining the rate of decline in maintaining profits and the success of the company.

“He addressed the effects, repercussions and analyzing organizational decline that happens in business in so many different levels,” said Brianna Kaltenbach, a junior economics major.

“He was able to draw strong conclusions and effectively present to the audience what could help organizations keep from declining as difficult as that could be.”

Audience members responded with a constructive discussion, referencing to his theories for why organizations lack in a solid structure of responsible people in the lecture.

“I know how important leaders are to an organization and the fact that strong and weak leadership can prevent or allow something to happen and go down even further makes such a difference,” Kaltenbach said.

Besides students, some attendees included Ibrahim Helou, dean of the College of Business and Public Management, and Avo Kechichian, chief financial officer.

“The fault is in the people, not the company,” Helou said.

“The company is not a living entity, but people are.”

Julius Fernandez, sophomore business administration major, said he found the lecture to be informative and applicable to their everyday interactions.

“Leaders are what bring everyone together in a business or any type of organization like sports,” Fernandez said.

“If your leaders aren’t someone everyone looks to for an example then everything is just going to fall apart.”

At the end of the presentation, Ghazzawi proposed a turnaround solution for organizations to utilize their resources to prevent a decline in a company.

He proposed addressing the issue first and foremost, acknowledging the decline, and implementing a viable course of action.

“He does so much and is highly regarded in business with his research,” said Rick Hasse, adjunct professor of accounting and finance.

“Large corporations seek his collaboration and hire him to help out. It was a very good presentation about a subject that a lot of people struggle with.”

Deborah Lee can be contacted at deborah.lee@laverne.edu.