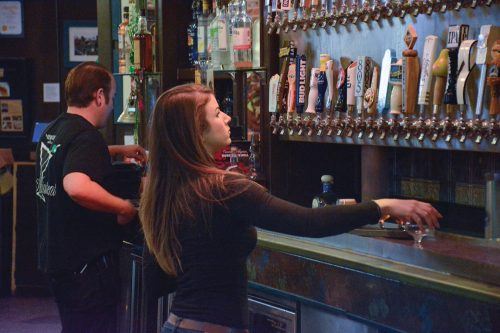 Lordsburg Taphouse bartenders prepare for a rush Tuesday night. California State Senator Scott Wiener (D-San Francisco) wrote SB 384, the Let Our Communities Adjust Late Night Act by which bars will be allowed to extend last call until 4 a.m. Bartender Jennifer Hillebrandt says she does not expect the bill to pass because similar measures have failed in the past. / photo by Conor Holahan

Last month, California State Sen. Scott Wiener, D-San Francisco, presented the Let Our Communities Adjust Late Night Act, in which local governments could move their last call time for purchasing alcohol between 2 a.m. and 4 a.m. at their own discretion.

Wiener said LOCAL would improve city nightlife. If bar patrons stay out later, other businesses would be more inclined to do the same.

Under Senate Bill 384, local governments must first approve the bar’s initiative. The Alcohol and Beverage Control then provides a secondary approval to extend the last call time.

This initiative already applies to major cities including Miami and Los Angeles.

For members of the La Verne community, safety is more of a priority than a financially flourishing nightlife.

Shawn Jones, bar manager of Lordsburg Taphouse and a La Verne resident, disagreed with this bill.

D Street’s popular bar and restaurant closes at 1 a.m. with no plans of changing anytime soon.

“Nothing good happens between 1 and 2,” Jones said. “I think DUIs will go through the roof. By 1 a.m., you’re babysitting adults. People can’t handle their liquor.”

While initially excited over the bill’s announcement, Lordsburg patrons Michelle Therrien and Leslie Trevino said it raises more safety issues in La Verne than in more bar-friendly cities like Fullerton or Claremont.

“Sometimes you don’t want the party to end,” Therrien said.

“I understand Vegas. For a small town like this, it would raise a lot of safety issues. From a business standpoint, it’s smart.”

While the city of La Verne is recognizable for the University, it is a smaller, more quiet town and D Street restaurants often close at 10 p.m.

“I can see both sides,” Trevino said.

“For bigger cities, it helps. Their cities are known for that. A lot of people come here to retire.”

Jim Miyashiro, senior director of university safety operations, said it is unlikely the law will pass.

While Campus Safety receives few calls about intoxicated students, he said this bill will only increase drunk driving.

“Even with the revenue, that’s not going to be enough to justify it,” Miyashiro said.

“Knowing this town, never in a million years.”

Most La Verne students agree as well. While students may enjoy drinking, it raises many safety concerns regarding drunk driving.

By extending the drinking time, students may stay out later to drink.

Junior business administration major Hassan Mohammed said drunk driving may be an issue for those who start their days earlier than most.

“People are commuting to their jobs at 4 a.m. It’s good for business because people will still be out spending money.”

Junior kinesiology major Harvard Kang said that while the money from later business hours and alcohol sales could be beneficial for the economy, it is an overall danger.

“Who’s really up from 2 to 4 anyway? In the long run, if more and more people are dying, no one will go back to bars.”

Junior kinesiology major Taylor Lesage said each community should be able to determine their own regulations.

Lesage said this bill is important for those who want to be responsible for their actions.

For this bill to be successful, more people would be held accountable for what they do while intoxicated.

He said if bars stay open late, people would spend more time in a public place, and would be at least partially supervised.

“People who are going to drink are going to find a way,” Lesage said. “If we have a bunch of drunken idiots dying, we can roll it back to 1 or midnight.”