By Campus Times Editorial Board, Natasha Brennan on April 21, 2017 in Editorials, Opinions 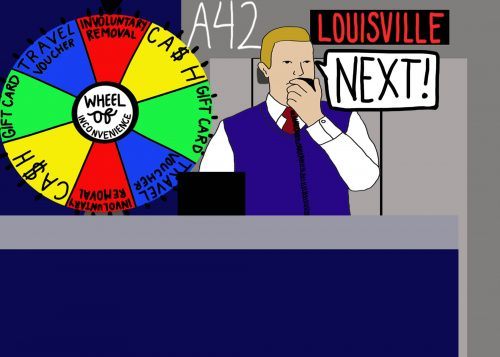 United Airlines has been in the headlines for forcibly removing a passenger from an overbooked flight to Louisville, Kentucky, April 9.

The incident was recorded by other passengers and quickly garnered outrage over social media. The passenger, David Dao, suffered a broken nose, concussion and lost two front teeth after refusing to give up his seat as he was a doctor who had patients to see the following day.

Although the use of such force may be a rare occurrence, the incident falls in trend with the air travel industry. Airlines commonly overbook flights and count on some passengers not showing up to maximize profits.

Typically, airlines make arrangements with voluntary passengers prior to boarding. Such passengers are offered compensation, usually in the form of travel vouchers, gift cards or cash, to willingly board a latter flight.

While compensation may work with some, there are still passengers who would choose not to rearrange plans. Passengers who paid for tickets should not have to be forced out of their seats, and most definitely not forced off the plane.

Although denied entry is a rare occurrence in comparison to the full data, it does not mean that this is not an issue. Airlines should not purposely overbook flights just because it is more profitable for them, and make consumers deal with the burden of miscalculations.

Harvard University economics professor Gregory Mankiw wrote that if airplanes do overbook they should bear the full consequences and offer compensation until passengers are willing to give up their seats.

Mankiw wrote that this will make airlines think more when overbooking flights.

This is only one of the symptoms that show the shortcomings of customer service in air travel and shows how the industry exploits its consumers.

An April 17 New York Magazine article by Eric Levitz also pointed to other factors that shed light on problems in the airline industry. The article highlighted lowered service quality and canceling low-volume routes.

The Independent also published an article this month that points out reasoning for lowered service quality in the airline industry. The author, Ben Chu, wrote about how airlines make little profit from the passengers that fill the majority of the flight. This explains the drop in in-flight customer service, as most passengers are non-premium and therefore there is less incentive on the part of the airline to give quality customer service.

“Indeed, given the imperative of ensuring that the premium experience is seen as premium (and therefore decent value) to the well-off, airlines have an incentive to make economy seem like a relatively unpleasant way to travel,” Chu wrote in “The treatment of David Dao by United Airlines is a lesson in the economics of air travel.”

Although ticket prices may be low and the number of flights have increased in recent history, other services provided by the airline industry are deteriorating.