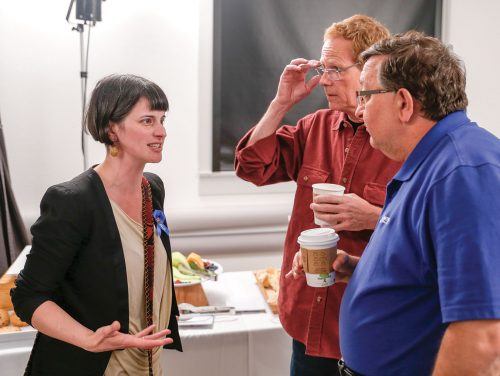 Photographer Scout Tufankjian speaks to Senior Adjunct Journalism Professor Randy Miller and ULV Graphics General Manager Raffi Zinzalian during a reception in the Carlson Gallery following her lecture in Morgan Auditorium Tuesday. Her work is part of the gallery’s exhibition “Framing Armenia,” on display until May 26. / photo by Breanna Ulsh

Fear of the unknown, violence, and leaving all familiar things behind are themes in the history of the 1915 Armenian Genocide, but Armenian-American photojournalist Scout Tufankijan chose to focus on the present conditions of Armenians around the globe.

“The Armenian Diaspora Project,” is part of the “Framing Armenia” series in collaboration with photographer Diana Markosian’s works from her series “1915.” The photographs are showcased in the Carlson Gallery as part of a visual anthology of a scattered culture, over the course of six years and across the span of over 20 countries.

Tufankijan spoke about her work Tuesday night in Morgan Auditorium and at a reception in the Carlson Gallery.

Although Tufankijan grew up far away from Armenia itself, she was never far from the culture. She recalled being bored as a young girl of 6, visiting Armenian neighbors with her grandparents every weekend, surrounding her with Armenian stories, customs, and traditions.

“I remember reading Armenian magazines and newspapers that they always had on the coffee tables, and I opened this one magazine that had a huge map of the world in it and it had little dots of all the Armenian clubs, and it just blew my little mind,” Tufankijan said.

It was the first time Tufankijan saw that there were Armenians in places she had never even thought of. As she grew older, this made her question her identity and what really connected Armenians to each other when they are countries apart.

“Was it the church?” Tufankijan said. “Was it political organizations, was it the food? Or was it something more ephemeral and less specific.”

Through over 400 interviews of Armenians worldwide, she found that they are tied by the deep history of their ancestors more than anything.

Tufankijan said that traveling back to the old country is what made her understand who Armenians are today.

“We’ve been making this place our home for 4,000 years,” Tufankijan said. “The trees we had planted were all still alive, the grooves in the hillsides that once held our homes stood in testament to the 30,000 Armenians that once called these small villages home, these things in a way connected people in a way that is impossible to erase in a mere 100 years.”

Visiting Professor of Photography Stacey McCarroll Cutshaw helped curate the event and said she found the topic fitting because of the University’s 125th anniversary aligning with the 102nd anniversary of the Armenian Genocide.

“The exhibit is about history and community which is what the ‘Tensions and Traditions’ theme is about. It raises awareness, as well as encouraging people to think of the present,” McCarroll Cutshaw said.

The exhibit was also planned to open specifically in the month of April in honor of Armenian Genocide Remembrance Day on April 24.

“Even in the Latino or Hispanic community, it’s relatable, no matter what you are,” Pineda said.

Professor of Photography Gary Colby said the exhibit points out the human ability to persevere.

“There are parts of our past that are good, and other parts that are not so good, but it’s a thread of continuity and we have to live with both,” Colby said.

The exhibit will run until May 23.