By Janelle Kluz, Miguel Fernandez on April 7, 2017 in LV Life 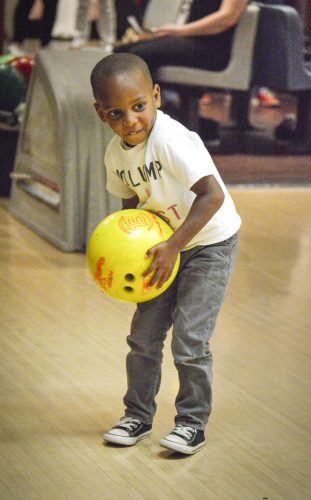 Myles Johnson prepares to toss the ball down the lane at Chaparral Lanes on March 30 to support “Fighting 4 the Tatas.” The benefit is sponsored by the Inflammatory Breast Cancer Organization. IBC is a rare form of breast cancer caused by cancer cells blocking lymph vessels in the skin. This fundraiser is a part of a senior project by communications major Megan Sears. / photo by Janelle Kluz

Students from the University of La Verne and supporters of a cure for inflammatory breast cancer came together to bring awareness all while having some fun striking out in bowling Thursday night at Chaparral Lanes.

The event, Take Control and Strike Out Breast Cancer, was a fundraiser with the goal of raising money and educating people about those affected by breast cancer, but more specifically inflammatory breast cancer, or IBC.

The fundraiser was brought forth by senior communications major Megan Sears. As a part of her senior project, Sears chose to work specifically with a breast cancer organization when a close relative was diagnosed with the disease.

Fighting 4 the Tatas is the organization Sears collaborated with to execute the fundraising event.

“I want to raise money and spread as much awareness as possible for the organization,” Sears said. “I want the community and students to learn more about IBC, getting tested, and spreading the knowledge.”

Fighting 4 the Tatas was established in 2014 by Joshlyn Earls and is the only IBC organization in the state of California. From visiting hospitals and support groups to even helping patients financially, Earls said she performs to the best of her ability to help those in need of even the simplest support.
“It warms our hearts that Megan took the time to help spread awareness and bring the community together,” Earls said.

Earls said that not many people are aware that IBC exists and that is the most lethal of all forms of breast cancer because is the quickest spreading. She added that IBC is not easily detectable and the most common side effects are redness and itchiness. No lump forms with this specific type of breast cancer, which is the common misconception most people have, Earls said.

“Women and men need to be educated that their are different types of cancer,” Earls said. “This cancer is killing young people, there is no definitive diagnosis or cure so I want to spread education and awareness.”

IBC is still not widely recognized by medical professionals and even patients who are affected by it. Vice President of Fighting 4 the Tatas, Denise McDonough was diagnosed 12 years ago. For three months she was misdiagnosed but only because of how difficult it is to detect IBC specifically and due to the little education known about it.

As a person affected, McDonough supports the organization by putting together several events to spread awareness about IBC.

“I wish someone was there for me when I was diagnosed,” McDonough said. “I didn’t even know what IBC was for a while.”
One of the biggest events McDonough has organized was collaborating with the San Dimas Rodeo to help spread education about IBC in the community.

Recently, the IBC community hit a giant milestone when Golden Globe Award winning series “Grey’s Anatomy” introduced a character with IBC specifically. Earls said that watching the show mention IBC was amazing because that meant people worldwide would be more informed about the quick-spreading cancer.

Fighting 4 the Tatas is now working on having a national day for the IBC.

For more information on the organization, visit fighting4thetatas.org.