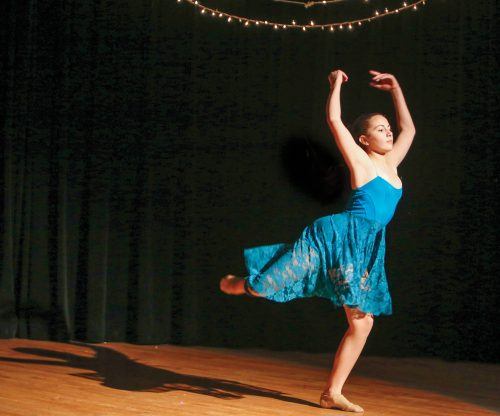 Annika Sanchez dances to “It Ain’t Me,” by Kygo, sung by Selena Gomez, during the Cabaret Student Productions event “The Creativity Thing,” Tuesday in the Jane Dibbell Cabaret Theatre. “The Creativity Thing” is a showcase of visual and performing arts, providing a space for local artists, including dancers, singers, guitarists and rappers to perform or display their work. / photo by Breanna Ulsh

Strings of light twinkled against black curtains. The sound of hula music and thirty people clapping to the beat filled the room as 7-year-old Lola Sanchez’s hips swayed rhythmically.

Her black and white striped dress made a dizzying blur as she spun and shook.

Trejo performed a freestyle rap, with only a beat blasting through the speakers to accompany him.

He rapped about being a senior, unsure of his future, and his love for music.

“Music is my food,” Trejo said.

Before she began, Meza apologized for some of the language in her songs, but the crowd seemed unphased by the cussing.

When her raspy, earthy voice didn’t fill the room, her skilled acoustic guitar solos did.

To end the night, senior music major Annie Johnson and sophomore music major Lorali Mossaver-Rahmani, together known as the Companions, took to the microphone.

The pair supplied their own background with banjos and a ukulele.

The Companions wrapped up the night with five songs, including covers and original songs the duo wrote together.

The two sang an original song, in both Spanish and English, that seemed to resonate with the audience, as they received a long applause when it was over.

“This song is inspired by my trip to Peru last summer,” Mossaver-Rahmani said.

She described the song as a story that describes her time with an intriguing guide in Peru.

The performances were a part of Cabaret Student Productions’ event, “The Creativity Thing,” held Tuesday night in the Jane Dibbell Cabaret Theater.

Cabaret invited all kinds of performers, including dancers, singers, guitarists, rappers and artists.

By the end of the night, seven artists performed.

“La Verne isn’t known as a very artistic school, so we are happy to provide this space for that,” sophomore theater major and Cabaret Student Productions President Courtney Clark said.

Aside from the performances, on display was a community art project painted at Cabaret’s last event, “Appreciation not Appropriation.”

When creating the piece, participants painted for 20 minutes and then moved five steps to the right and finished whatever ended up in front of them.

Projected onto a screen was some of Clark’s photography.

Displayed on tables along the walls were handmade jewelry, models, and paintings.

Freshman theater major Jordan Nelson had some of her paintings on display.

On display was an elaborate canvas painting of a red dragon against a black background.

Nelson said she painted the dragon years ago.

She thought to share the piece when she was asked if she had any art to display at the event by sophomore theater major and Cabaret Student Productions Vice President Ashley Weaver.

Another one of Nelson’s pieces on display was an astronaut floating in space, holding the planets on strings like balloons.

“The astronaut was made at an art acoustic night last semester,” Nelson said.

“They were having performers as well as three easels set up so we could paint live. We had about an hour, and I came up with that.”

Cabaret Student Production’s will be holding Youth Art Night 7:30 p.m. May 9 in the Jane Dibbell Cabaret Theatre as its final event of the semester.

“It’s very important to have our youth have a foundation and know where they could possibly end up one day,” Weaver said.

The crowd snapped in agreement.

“Maybe they could end up be here at this university,” Weaver said.

“We know, and other artists know, it can sometimes be daunting as a high school student to continue your artistic endeavor, and we’re really trying to support that,” Clark said.