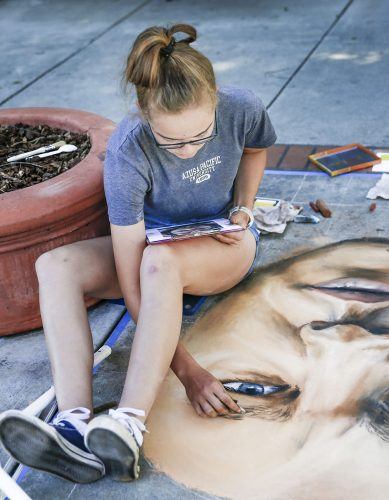 Katie Bush, 14, sketches actor Matt Damon on the movie poster of “The Martian” as her submission in the Glendora Chalk Festival competition Saturday in downtown Glendora. The festival also featured a costume contest, face painting, a chalk garden, a talent show and local vendors. / photo by Cierra Boess

Impressive works of art and colorful chalk dust lined the sidewalks of the Glendora Village, as the sound of children singing and the smell of greasy pizza filled the air.

For 10 years, Glendora has held its annual Chalk Festival in the streets of the village, down Glendora Avenue from Foothill Boulevard to Bennett Avenue.

Categories included Best Technique, Best Use of Color, 3-D, Best of Show and Crowd Favorite. Judges chose the winners of categories while the community voted for Crowd Favorite.

Pining for Crowd Favorite and the $100 prize was 16-year-old Kayla Garcia, who drew Belle and the Beast from Disney’s cartoon version of “Beauty and the Beast.”

Garcia practiced for the competition by drawing at home with colored pencils.

Garcia said she was inspired by the new live-action version of “Beauty and the Beast” and her mother’s love for the films.

“My mother absolutely adores ‘Beauty and the Beast,’” Garcia said. “I’m doing this in honor of her.”

As people walked by Garcia’s piece, they commented with “Wow,” and “It looks beautiful.”

“It’s really nice to hear,” Garcia said. “Especially since I’ve been working on it since 10 a.m. this morning.”

“We decided to add the talent show to expand and turn it more into an actual festival,” Phillips said.

The judges chose winners from each age division to be put on Top Billing Entertainment YouTube channel. The video with the most likes by April 9 will receive a $250 prize.

Glendora resident Meg Ponce competed with her daughters Ayden, 12, and Evalani, 8. The trio sang “I Know It’s Today” from “Shrek the Musical.”

“It was really fun and a great experience for the girls,” Meg Ponce said.

Ayden Ponce said that she appreciated the opportunity to perform with her mother and sister. Evalani Ponce said she hopes the competition makes her famous.

The festival highlighted not only the talents of the community, but the many downtown businesses.

“The businesses get a lot of revenue today, especially the restaurants,” Phillips said.

“People are coming in that may have never known it’s been there for 30 years and they discover us,” Phillips said.

The festival also included a costume contest based on the festivals theme, Adventures in Story Land.

Results of the talent competition, costume contest and winners of the different categories of the chalk festival will be announced next week.