By Alexandra Arkley, Taylor Bolanos on April 28, 2017 in LV Life 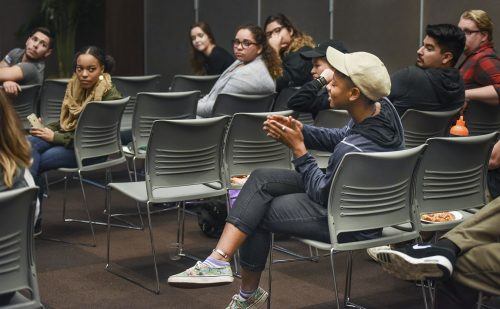 Freshman anthropology major K’lema Burleson participates in a group activity during “In her Shoes,” a women’s empowerment event Monday. Participants were grouped as men, women and gender fluid, then asked to tell the other groups something about themselves. This activity was designed to demonstrate listening and letting others know they’ve been heard. / photo by Alexandra Arkley

Empathizing with strangers may just be as easy as walking in someone else’s shoes.

The class focuses on building advocacy for a cause while teaching core values: persuasion, networking, marketing and planning. “In Her Shoes,” is just one of several projects Allison’s class has worked to complete this semester.

“‘In Her Shoes’ means empathizing with a woman trying to put yourself in her shoes at least,” Gonzalez said. “It’s a whole different world.”

With help from the House of Ruth and Her Campus La Verne, the “In Her Shoes” team said they hoped examining gender identities and the struggles women encounter would help men understand and empower women.

After an explanatory sideshow from the team, Loera and Reyes led students through activities to explore communication strategies, understanding of gender and understanding others’ identities. They emphasized that they room was a safe space for honest discussion, free of censorship and judgment from other participants.

“You don’t have to come as the expert in anything but your own life experiences,” Loera said. “We’re just simply asking you to share what life in your own shoes has been.”

The first two activities, in which students moved to different sides of the ballroom or stood up if sentences applied to them, allowed for understanding and respect for the final activity, in which students separated into three groups for discussion, with help from Wagoner, and then returned to voice their thoughts to the other groups.

Each group shared what the other two groups should know about their identity. The women’s group opened the discussion.

“Would you say the things you told me to your daughter,” sophomore criminology major Keyera Collins said. “If you can’t talk to a lady, then we can’t talk at all.”

“We’re not confused,” Burleson said. “We know who we are. It’s just trying to get you guys to understand.”

The men’s group spoke and Rivera, one of the team members, gave an apology for misunderstanding other gender groups.

“I have sisters and a mom, Rivera said. “Us men, sometimes we forget to support women.”

Rivera said this project helped him understand his weaknesses and what he lacks when trying to understand women.

While the truth about women’s issues may be hard to face, Rivera said that women are right about their own issues and should be empowered.

After empowering other gender identities, Reyes said it is important to lift them up, because the conversations should continue long after the first discussion.

“We have to stick together,” Reyes said.