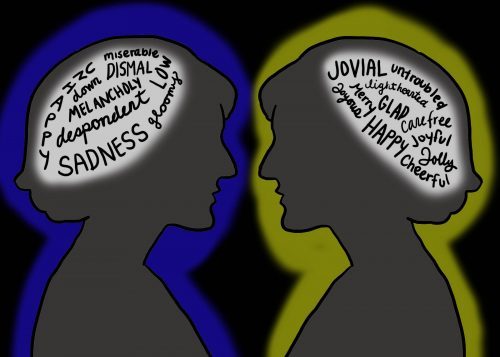 There was a time in my life when I sat in front of the television for hours without moving. I would check to-do lists six times a night before sleeping but would still climb out of my bed and add to the ever-growing list on a chain of Post-it notes by the glow of a night light. I was 10 years old when the first symptoms of depression and anxiety started to appear. When I was 13, I needed antidepressants to function. After years of dealing with depression, I finally felt lively again. Depression and anxiety walk hand-in-hand and are no strangers to conversations in my home. Even now at 20, I have spent days locked away in my room and slept for 16 hours at time. I consider myself lucky to have caught these issues as early as I did. I believe it improved the rest of my life.

The University of Cambridge released a study in January, which analyzed the impact of young adults with depression and the benefits of health services including therapy. Over the course of five years, Sharon A. S. Neufeld, Valerie J. Dunn, Peter B. Jones, Tim J. Croudace and Ian M. Goodyer studied depression in approximately 1,200 14-year-olds.

According to the study: “14-year-old adolescents who had contact with mental health services in the past year had a greater decrease in depressive symptoms than those without contact. (And) by age 17 years, the odds of reporting clinical depression were more than seven times higher in individuals without contact than in service users who had been similarly depressed at baseline.”

According to the World Health Organization, 300 million people suffer from depression and less than half receive treatment. This does not include undiagnosed and misdiagnosed cases. La Verne youth of all ages, from elementary school up to college age, have access to mental health services within their schools that may reflect positively in their mental health as adults.

The University of La Verne’s counseling and psychological services focuses therapy around helping students find their personal identity and find comfort in communicating with a therapist. CAPS Director Elleni Koulos uses art therapy and expression to help develop identities. Koulos said children and teens without a strong sense of self may develop depression, and establishing a comfortable environment for them to communicate facilitates their personal growth.

“All research suggests that having one positive person, on positive influence, can change their trajectory,” Koulos said.

Whether the supportive person is a teacher, therapist or parent, belief in a child or young adult is vital to his or her sense of identity. The CAPS staff agrees that validating experiences and emotions improves someone’s well being, Koulos said.

Koulos said depression shows its symptoms differently from person to person, but children with depression typically express boredom, anger, loss of interest and isolation. Anxiety is a growing concern in children and teens that she works with. These feelings may even develop into physical pain, including headaches and stomach aches.

“Kids and everyone need consistency, unconditional positive regard, and that’s what therapy is,” Koulos said. “Kids need boundaries in order to feel safe. Therapy ideally works because it’s the same time, same place. No matter what you do and say, it’s safe within the boundaries and structure of the environment.”

Establishing consistency in a neutral space helps children and teens feel safe enough to share who they are and how they feel, without outside expectations. Koulos focuses her efforts on breaking down hopelessness and helplessness.

CAPS staff psychologist Albert Perez said teaching coping skills and problem solving in young people improves their lives. These skills, with the help of consistent, cooperative parents and a comfortable home life, ease children’s transitions into therapy and through life. Perez said parents may confuse a child if they are inconsistent with each other or don’t allow a child to build their own identity.

“The biggest barrier a lot of the time is the parents,” Perez said. “One of the main focuses is to help (children) find their voice.”

Mental health education for parents, teachers and children creates the communication needed to expand awareness for youth with depression and potentially fulfill the result of Cambridge’s study, lowering depression rates in youth, by teaching them to use mental health care services.

“Schools need to change,” Koulos said. “The human experience is one thing we all have in common, but no one teaches it. Everyone else can’t see it because we’re all afraid to talk about it, but what a difference it would make if we did talk about it.”

Koulos said teachers, parents and students all have a hand in children’s mental health, and schools do not teach enough about emotion and managing life. Breaking the genetic cycle of depression in children starts with educating the community and students even at elementary school ages. In “Teachers’ Perspectives of Children’s Mental Health Service Needs in Urban Elementary Schools,” a study for the April 2007 issue of Children and Schools, James Herbert Williams, Violet E. Horvath, Hsi-sheng Wei, Richard Van Dorn and Melissa Jonson-Reid compared two focus groups of elementary school students and their ability to recognize mental health issues amongst students.

The study focused on six themes, including “skill and comfort with recognizing mental health problems in students, knowledge of resources and services available to students with mental health problems (and) whether students benefit from the services.” One school studied a range of health care professionals and meetings for student behavior, in comparison to the second school, which only had an uncertified counselor and a part-time social worker.

Teachers from both groups said they could identify problematic behaviors that may signal deeper issues, such aggression or withdrawal, and said while parents were supportive of a student’s education, they were generally not supportive of the teacher’s observations of the student’s mental health or behavior. Teachers said they felt parents did not follow up on health recommendations.

Claremont’s Sycamore Elementary School teacher Jessica Marchant has taught for 15 years and currently teaches 4th, 5th and 6th grade students in a combination class setting. Since the start of her teaching career, Marchant has seen a range of behavior in her students and has learned to identify concerning behavior and distinguish it from normal mood fluctuations.

“I’ve seen the kids that can be perfectionists and get very upset if something does not go right,” Marchant said. “The reaction to a mistake goes far beyond what would be a normal response. Sometimes there’s that checked out spaciness.”

Marchant, who was diagnosed with anxiety herself, finds that her personal experience is instrumental in seeing changes in her students’ behaviors. She said even her young students have related to the feelings of anxiousness and stress. With this experience, Marchant makes sure her students are aware of their feelings. She considers her students’ home life and emotional situations and individualizes expectations for their abilities and behavior. Marchant said she stays updated with her students, their friendships and families and informs parents and school staff if necessary. For her students, mental health education starts at the most basic level: understanding their emotions such as disappointment, nervousness and fear. Emotional expression within the classroom will improve their coping abilities and reduce mental health stigma.

“It’s being able to get into more nuanced emotions and feelings so it’s beyond happy and sad, getting kids to articulate their feels and express them,” Marchant said.

When Riverside resident Terri Bunch noticed a change in her 14-year-old daughter’s behavior, she immediately became concerned. Her daughter’s overall lack of optimism and hopelessness for life were warning signs of something serious. With a degree in behavioral science and a family history of depression, Bunch identified symptoms that other parents may have not.

“I was talking to the depression and not her at that point,” Bunch said. “When a child is a teenager, sometimes it’s hard to tell if it’s normal teenage angst, but this definitely seemed like something more. I think if I had not had the training, I might not have noticed it.”

She sought medical assistance when her daughter was diagnosed with major depressive disorder and visited with multiple doctors before finding the right match. Although initially wary, they eventually decided to try medication, which showed positive results. She and her daughter also helped conquer her depression together by hiking. After nearly nine months, she showed positive improvement and was taken off Prozac until she was 17 but ended up in the hospital after relapsing into depression and felt hopeless. Six months of Wellbutrin later and Bunch said her daughter was coping again.

Bunch credits her knowledge of mental health as what saved her daughter’s life. She said teaching mental health in schools and understanding the distinction between normal teenage behaviors and mental illness is crucial for saving future lives. She also said it is important for parents to be open to discussion, to the possibility of medication for their children and to trust their instincts.

“So many people miss the signs,” Bunch said. “As a parent, you get that feeling in your gut and the hair on the back of your neck stands up.”

It has been nearly 15 years since Bunch and her daughter made their first trips to a psychiatrist’s office together. She has seen the coping behaviors her daughter learned in therapy become automatic reflexes to depression.

“This is not your fault, but it is your responsibility to manage it,” Bunch said.

“I’ve mastered the fake smile,” said ULV sophomore anthropology major Rachel Fox. “It’s like a roller coaster. You’ll have really good ups and really bad downs, and over the summer it was a lot of downs.”

For most of her life, Fox felt depressive and anxious tendencies. Originally unaware of her father’s history with depression and the signs of depression she already identified with, she faced daily anxiety attacks without understanding what they meant.

While her first encounter with a therapist last September did not solve problems like she hoped, it helped her become more comfortable with discussing mental health and more willing to meet a psychiatrist. Understanding the signs of depression helped her identify her changes in behavior and allowed her to take advantage of La Verne’s health services with better results. For Fox, part of her mental health battle was simply educating herself about depression and being open to conversation about it.

“I can tell when I’m having my bad days,” Fox said. “I know what I need to do with this. It’s easier to ask people for help to live a happier life.”

The Future of Education

Building communication about mental health and education for students and parents may increase awareness of signs and symptoms for depression in children. This may allow parents to diagnose children early, which Cambridge has proved lowers rates of depression in the future. Strengthening mental health education may start as early as elementary schools, rather than high school health classes. This can be as simple as teaching a broader range of emotions.

It has taken me years to feel happy and safe in my own head. When I face tough days, the days when I am too unmotivated to even leave my bed, it may be hard to focus on anything other than depression. On those days, I paint or play with my dog. While it takes time to snap out of my hibernation-like state, I know the best thing for me is to keep pushing forward. I can’t imagine my life without the help I received seven years ago.

Diplomacy is only path in North Korea
DACA, security discussed