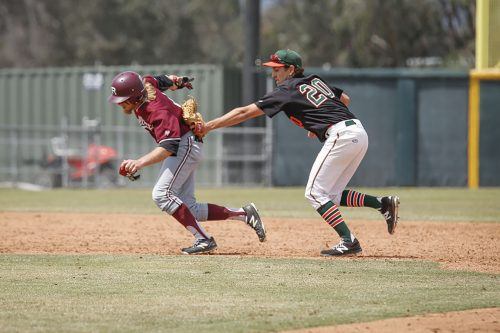 La Verne sophomore second baseman Luke Gutierrez tags out Redlands senior left fielder Mitch Samson in a pickle between second and third base in the top of the fifth inning of the second game Saturday. The Leopards faced the Bulldogs in a doubleheader at Ben Hines Field, winning 4-3 and 5-3. The next game is scheduled for Friday at Pomona-Pitzer. / photo by Taylor Griffith

Sound defense and solid pitching gave the Leopards the advantage in a sweep of the Redlands Bulldogs on Saturday at Ben Hines Field. La Verne won the first game 4-3 and the second 5-3.

The Leopards improved their overall record to 16-14 and their Southern California Intercollegiate Athletic Conference record to 10-5, good for fourth place.

“We’re a tough team,” senior third baseman Justin Wright said. “When we get the lead we’re looking to tack on more all the time.”

La Verne got the scoring started in the first game when sophomore designated hitter Chris Peres hit a fly ball to centerfield and scored sophomore right fielder Chris Ligot, giving the Leopards an early 1-0 lead in the bottom of the first inning.

Senior left fielder Mitch Samson got Redlands on the board in the top of the second with a two-out single, scoring junior Kyle Kabeary from second to tie the game, 1-1.

The Leopards regained the lead in the bottom of the second when Wright reached home on a throwing error, making it 2-1.

They added to their lead in the bottom of the fifth inning, after a single to right field by Peres scored freshman shortstop Jacob Benson, giving him his second RBI of the game and La Verne a 3-1 advantage.

Senior catcher Dylan Lowenstein added to the lead with a single of his own to score senior left fielder Jakob Thomas, increasing the Leopards lead, 4-1.

It almost looked as if La Verne was going to take full control of the game, but Redlands would not go away easily. Their pitching staff caught fire the rest of the game, as the Leopards could not manage a hit after the fifth inning.

“I think we need to put together better quality at-bats and the hits will come after,” Thomas said. “It’s important to focus on one at-bat at a time and not focus on more than that.”

Redlands managed to get back on the scoreboard in the sixth inning, after junior second baseman Will Hall scored on a fielder’s choice, narrowing the Leopards lead, 4-2.

The rally for Redlands continued in the top of the eighth, when freshman designated hitter Andrew Renteria singled to right field to score senior third baseman Christopher Scalisi and trailed by only a run.

Freshman pitcher Cody Norman, who threw two innings for La Verne, struck out two batters and surrendered one run, said you can’t overthink when pitching in a close game.

“You’ve got to try not to think about it,” Norman said. “You just got to pitch like it’s a 0-0 game every single inning you’re out there.”

La Verne was caught in another close game in the second game of the series.

Redlands jumped out to a 2-0 lead with a pair of RBI singles by Scalisi and sophomore catcher Brendan Moore in the third and fifth innings.

The Leopards offense finally got going in the bottom of the fifth when Wright’s single down the right field line scored Benson and sophomore infielder Luke Gutierrez, tying the game, 2-2.

Wright was 2-for-8 in the series with one run and two RBIs.

The tie remained until the eighth, when La Verne’s offense exploded with three runs.

Thomas gave the Leopards the lead after he doubled down the left field line, scoring Ligot.

Thomas would score on a wild pitch later in the inning, giving La Verne a two-run lead.

The scoring was not done there, as Lowenstein singled to right field and scored sophomore left fielder Brandon Vogel from second, making it 5-2.

Redlands would score a run in the final inning to cut the lead, 5-3, but their offense did not have any more left in the tank after that.

The sweep put the Leopards above .500 and the playoffs are just around the corner.

Thomas said the offense needs to hit better, but overall the team feels confident for the rest of the season.

“We stand right there with every other team and just need to play Leo baseball,” Thomas said.

Next up for La Verne is a home game against Pomona-Pitzer at 3 p.m. Friday at Ben Hines Field.

Christopher McMahan can be reached at christopher.mcmahan@laverne.edu or on twitter @webhead122.