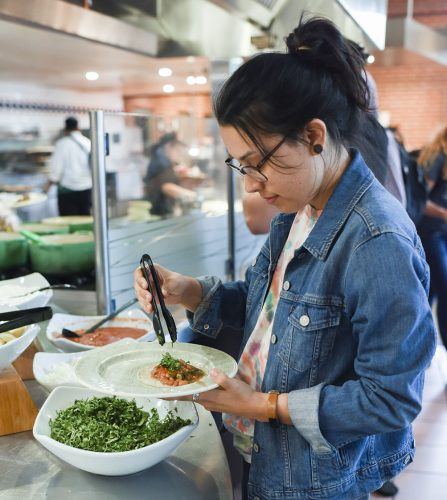 Senior psychology major Lacey Corcoran prepares her dinner in Davenport Dining Hall with the available vegetarian and vegan options. Corcoran substitutes the meat on her tacos with beans and tops it off with salsa and cilantro. Bon Appétit offers limited grill and main station options, which forces Corcoran to get creative with her vegan meals. / photo by Alexandra Arkley

“Including meat in my diet again would just feel backwards,” Corcoran said. “I feel like I’m contributing to the benefit of the world and taking suffering away from animals that don’t have voices to say stop.”

Vegetarianism in America, a study published by Vegetarian Times in 2008, showed that 3.2 percent of American adults, 7.3 million people, follow a vegetarian-based diet. Approximately 0.5 percent, or 1 million, of those are vegans.

Corcoran decided to transform her lifestyle after watching videos on the mistreatment of animals and researching the effects veganism has on the body as well as the environment.

Carey and Corcoran both work in the housing office for the University of La Verne. Carey works as a resident assistant and Corcoran is the programming co-chairwoman for the Residence Hall Association.

Living on campus, the couple resorts to eating similar meals each day; however, as a self-proclaimed vegan advocate, Corcoran reached out to Juan Regalado, associate dean of students, to push for changes in dining options.

Corcoran sits in on monthly food committee meetings to urge the dining services to offer more than two to three vegan options a week.

“I’m not a vegan two to three times a week,” Corcoran said. “I’m a vegan every day.”

Agaly De Jesus, junior kinesiology major, was a vegan at the University for two years. Her life style restricted her from eating animal products like eggs, meat, fish, butter or milk and she had to get creative to refrain from a repetitive diet.

De Jesus said it was difficult to be a vegan on campus. She decided to finish her college career as a vegetarian, but plans on resuming her vegan lifestyle after college.

Corcoran is working toward educating the dining services and expanding their vegan menu by collecting recipes like black bean soup to show the cooks what a plant based meal includes.

Davenport has eight breakfast items listed on its website, but only one is labeled as vegan friendly.

“I liked to order from Barb’s because I could get burrito bowls with tofu, and veggie burritos,” De Jesus said.

The University has taken steps to providing a more inclusive menu. Barbara’s Place has added to its Friday chicken menu by including tofu and veggie tacos, but Corcoran is striving for new vegan additions to the breakfast menu.

A typical lunch menu at Davenport includes nine options and the grill service; however, each of the seven vegetarian options include the following description, “Contains no meat, fish, poultry, shellfish or products derived from these sources but may contain dairy or eggs.” This vague and mysterious labeling creates a guessing game for vegan students.

“People can be super allergic to eggs or dairy, and it’s not good to make those labeling mistakes,” Corcoran said.

During her time as a vegan, De Jesus kept snacks like Cliff bars and Naked Juice in her room, but when she would eat lunch at Davenport she opted for rice, spinach, potatoes, salads and fruit.

The Café Bon Appétit dinner offers 12 options along with the grill and has steamed green beans labeled as their only vegan friendly option.

“The reason I went to Juan is because we were buying a lot of stuff to get our needs met, and that didn’t seem fair since we’re spending the same amount for a meal plan as everyone else, but we’re not getting the same options or benefits,” Corcoran said.

After Corcoran expressed her concerns with Regalado he forwarded her email to Justin Alarcon, the head chef at Davenport. She is planning a meeting with Alarcon.

“A lot of people don’t want to watch the videos, and they choose to ignore it,” Corcoran said. “But I think those are important to watch, because you need to know what’s happening to the food you’re consuming every day.”

Organizations like Mercy For Animals have completed undercover investigations on meat suppliers like Tyson to reveal animal abuse. This includes birds being crammed into filthy, windowless sheds and forced to live for weeks in their waste and toxic ammonia fumes.

The Bon Appétit Management Company has seen an increase in the amount of students who follow a vegetarian or vegan diet and are requesting more options.

Terri Brownlee, the regional director of nutrition for the company, reported that from the 2005-2006 school-year feedback survey the company administered to students, eight percent said they were vegetarian and less than one percent said they were vegan. But their 2009-2010 survey reflected 12 percent identifying as vegetarian and two percent as vegan.

Students pay anywhere from $2,610 to $3,115 for their meal plan, but Carey said her plate just looks like a bunch of snacks.

“I would rather spend those thousands of dollars on food from the grocery store,” Carey said.

The University has implemented a new category on their housing application, which gives students the opportunity to share their eating habits. This new change will help the housing office account for vegan and vegetarian students living on campus.

“It’s important to bring up these issues now, so that when they’re building the new dining hall they can keep them in mind,” Carey said.

One Response to More students turn to vegan diet