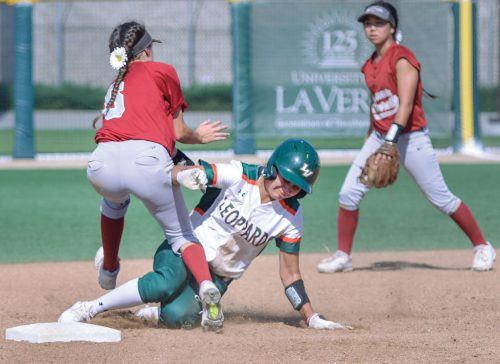 La Verne junior third baseman Haley Gomez attempts to steal second base during the bottom of the sixth inning of Saturday’s second game against Chapman. Panther freshman infielder Michaela Foisy tagged her out, but the Leopards still managed to win, 4-0. The Leopards have an overall record of 25-9 and a 18-6 record in SCIAC play which is good for first place. / photo by Conor Holahan

The Leopards faced Chapman on Saturday at Campus West, splitting the doubleheader with the Panthers.

The Panthers capitalized on the moment and scored three runs in the third inning.

Although the Leopards answered back with six hits, they only managed to produce one run off an RBI single by sophomore outfielder Sienna Kendricks, losing the game 3-1.

The Leopards came into the nightcap ready for war with senior pitcher Hayley Jaquess as their weapon.

“After a tough loss in the first half, I knew we were going to have to attack early,” said Kendricks.

Jaquess allowed eight hits, and the defense retired them all, resulting in a shutout win for Jaquess.

The Leopards got the game rolling in the bottom of the third inning with a bases-loaded bloop single to right field by senior first baseman Alexis Schiff that brought in two runs.

The women continued to rack in the runs in the fifth inning with consecutive RBIs by Kendricks and Schiff, giving them a 4-0 lead.

During the seventh inning, and the Leopards lead and Jaquess’ shutout were in danger.

The Panthers capitalized on an error and produced a single.

With two runners on, the pressure was on Jaquess, but it wasn’t anything she couldn’t handle. Jaquess forced the following batters to ground out, killing any chance of the Panthers making a comeback, and sealing the win 4-0.

“It was an amazing moment, but I was thinking about my girls, and helping my team out more than anything,” Jaquess said.

“Softball game is a game of failure,” said Schiff. “But minimizing controllable errors will keep us on top.”

The Leopards will travel to Whittier for a doubleheader starting at 2 p.m. Friday.