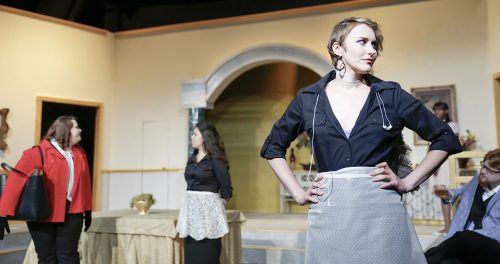 Comedy and poetry collided in the theater department’s opening of “Tartuffe” April 20 in Dailey Theatre.

Dorine, along with the other eccentric characters in the play, ushered the audience back to Paris in 1664.

The play was directed by Associate Professor of Theater Arts Sean Dillon.

“Although were using a 20th century translation, it’s not at all adapted to our own time, but the play itself has these long lasting and universal ideas that resonate with the current climate that we’re in,” Dillon said.

Throughout the play, Tartuffe attempts to steal the money and wife of Orgon, played by sophomore theater major Dan Jerz.

Unfortunately, Mariane is in love with the comedic Velère, played by alumnus Aaron Avalos.

When the entire family, besides Orgon, suspects Tartuffe is not being truthful, Dorine leads a plot to uncover his true motives.

“I wanted (Dorine) to be likable, she’s the one who sets up the plan to expose Tartuffe for what he is and I wanted her to be understood and to be interesting,” Bias said.

Bias participated in the play as her senior project.

Orgon’s wife Elmire, played by freshman theater major Jordan Nelson, lures Tartuffe into showing his sexual desires toward her while Orgon spies from under the table.

In one of the many shocking moments, Tartuffe reaches to lift up Elmire’s skirt.

He is greeted by Orgon’s head popping out from underneath the table, between her legs.

“For the head reveal under the table, we were expecting a lot of laughs from that and we have every night so far,” senior theater major and stage manager Makenna Zambrano said.

The play itself was poetic in nature with the characters bouncing rhymes off of each other’s lines.

“I think the audience responded well to the script itself which was really funny,” Dillon said.

“Sometimes it takes a while to adjust to the poetic language, but once they warmed up to it we had a good time.”
Theater alumnus Alex Freitas saw the play opening night.

He said he enjoyed the poetry and comedy in the play.

“I actually talked to one of my friends and we thought it would be a little much, but the way it was presented added to that comedic tone,” Freitas said.

“The pacing, timing, lines and cues, it was really phenomenal and a joy to watch,” he said.

Although the play was written to respond to the issues of the 1600s, the social commentary resonates even now in the 21st century.

“I would describe it as funny, unexpected and relevant,” Zambrano said.

“I mean, how many people do you know who talk a big game and say things they don’t really mean and put on a show for people and some people are just too blind to recognize it? That’s pretty relevant for now in this time.”

“Tartuffe” is showing in the Dailey Theatre Friday and Saturday at 7:30 p.m. and Sunday at 2 p.m.

Tickets are available at the door or at tartuffeulv.eventbrite.com.

The suggested donation is $8 for students, $12 for staff and seniors and $15 for general admission.