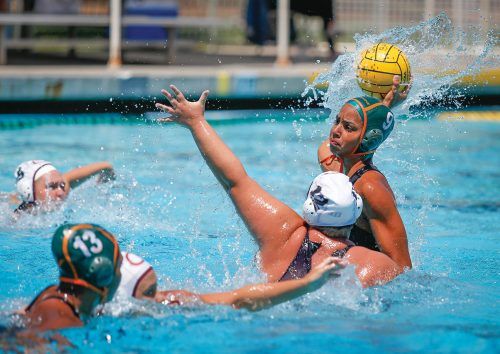 The Leopards beat Chapman in the first round of the tournament, 14-11, to clinch a match against Pomona-Pitzer in the semifinals.

“Our mindset is we wanted to come out and play Leo water polo,” co-interim head coach Mason Cox said. “We came out pretty strong, but I think we were getting too many ejections. I thought we got caught with our hips down a lot, which doesn’t help on defense.”

Senior attacker Ardelle Aquino got the scoring started early for La Verne, notching two quick goals in the first half to help give the Leopards an early 2-0 lead.

The Panthers, however, did not go away easily, scoring four goals of their own in the first half, but La Verne still led 8-4 at halftime.

Senior utility Stephanie Rosero was the top scorer of the match, scoring four of her five goals in the second half.

“They’re a feisty team,” Rosero said. “You’ve got to give it to them, and they wanted to give us a game and they did.”

Sophomore attacker Guarina Garcia and senior center Megan Little each notched a hat trick to help the Leopards advance to the semifinals.

Freshman goalie Jordan Ehara had five saves and a steal in the opening match of SCIAC championship play.

Cox added that he rested a few of La Verne’s starters in the opening match because of the quick turnaround the team faced from one match to the other over the weekend.

However, his strategy changed because Chapman kept scoring to keep the match close.

“The more I can rest the girls, the better,” Cox said. “It really puts the girls that are coming off on that second line a lot more game-time experience, but they kept on scoring and staying in the game so I had to mix it up a little bit more.”

In the semifinals, La Verne faced Pomona-Pitzer, one of only two teams in the conference to finish with a better record.

The offense struggled for the Leopards in the second round, as the Sagehens scored eight of the first ten goals. The Leopards would never recover from their slow start.

La Verne tried to cut the lead and junior Jasmine Bustamante had three goals in the second half, but Pomona responded with seven goals of their own to drop the Leopards, 15-8.

It was La Verne’s second loss of the season to Pomona Pitzer, who beat them 5-4 in a match in March.

“We missed a lot of opportunities the first time we played them,” Cox said before the semifinal round.

“They’re very deep. One through 12, they all can contribute a lot and in water polo that is pretty significant because it is a very tiresome game,” he said.

La Verne was able to salvage the weekend, capping off the tournament with a 9-7 win over Cal Lutheran to assure that they would finish the season third place in the SCIAC.

Garcia added a goal and two assists in the Leopards win.

“This is my first year on a team like this,” freshman goalie Jordan Ehara said. “The level of water polo that we have at La Verne, I’ve never had so much faith in my team before.”

This was only the second SCIAC women’s water polo championship appearance for the Leopards. In both instances they advanced to the semifinal match.

The team finishes the 2017 season with a 14-10 overall record and an 8-3 SCIAC record. They will lose eight seniors in the off-season, but will still look to return to the SCIAC championships for a third straight year.