By Janelle Kluz, Miguel Fernandez on May 19, 2017 in Feature Slider, News 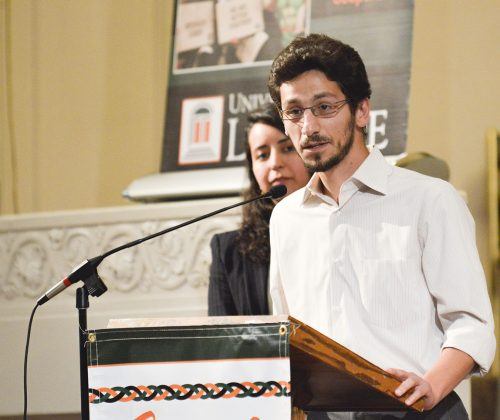 Graduate student Firas Arodaki and law student Yunuen Trujillo receive their Spirit of La Verne Awards Monday at the La Verne Church of the Brethren, making it the first year that the committee has recognized two recipients of the award. The Spirit of La Verne award is given to those who demonstrate two of the three core concepts of La Verne: community engagement, interfaith cooperation, and diversity and inclusivity. Arodaki advocates for Syrian refugees and Trujillo advocates for the inclusion of LGBT Catholics in their religious communities. / photo by Janelle Kluz

The University of La Verne honored individuals and groups that portray the University’s core values of community engagement, diversity, inclusivity and interfaith cooperation at its fourth annual Spirit of La Verne Recognition Ceremony Monday night at the Church of the Brethren.

Roughly 100 community members attended the event, which recognized and awarded 31 individuals and groups whose service and time has made an impact in the community.

The event began with Provost Jonathan Reed thanking the Church of the Brethren for hosting the event and a brief history between the University and the church.

Amaya was awarded for his involvement in the Office of Civic and Community Engagement as well as his work as a child director as his local congregation.

“It feels humble to be recognized because I constantly serve the community without any expectations of getting anything back,” Amaya said. “But I am honored to serve people of many backgrounds.”

Many of those awarded were current students, or had attended the University in the past.

The last two awards of the night were the Spirit of La Verne awards, which are the highest honors given to the recipients.

The University gives these awards to individuals who possess at least two of the three core values instilled.

Normally there is only one recipient of the award, but since it is the University’s 125th anniversary, two students were chosen to receive the award.

Arodaki received his bachelors in computer science and engineering and is currently pursuing his masters in Leadership and Management, specializing in nonprofit organizations.

“It’s actually like a positive burden on me to receive this award, this encourages me to do more work and encourage others to do more as well,” Arodaki said. “For me, I was encouraged by the University and I was motivated to make a change in my community.”

Arodaki is a youth committee advisor for the Syrian American Council and the co-founder and Chief Financial Officer of American Relief Fund.

Trujillo immigrated to the U.S. when she was only 16. She currently is a social justice advocate for the organization LA Voice Pico.

She also advocates for the inclusion of LGBT members in the Catholic Church.

“Honestly it was a surprise to receive such a high honor, I did not expect it,” Trujillo said. “I’m really humbled for being recognized for my achievements and I am happy I was able to share it with my family and friends.”

Before ending, Reed asked the crowd to begin thinking about certain individuals who would be perfect candidates for next years award ceremony.